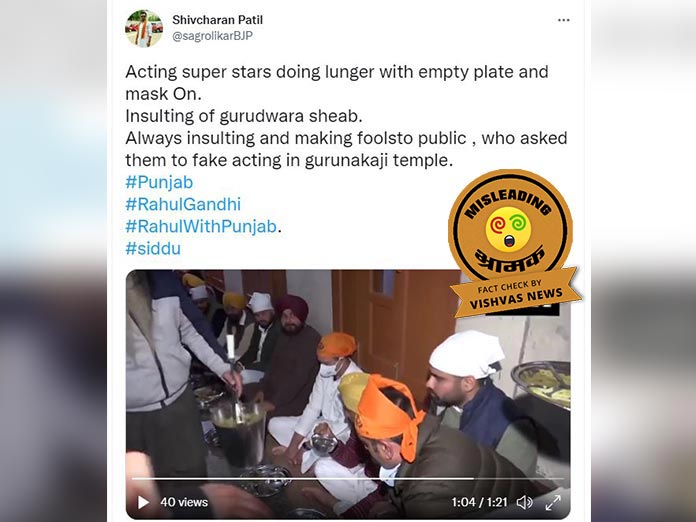 New Delhi (Vishvas News). Congress leader Rahul Gandhi, along with 117 candidates from Punjab, had reached Amritsar’s Golden Temple Harmandir Sahib on Thursday to offer prayers. A video of him related to this is getting viral on social media. In the video, Rahul Gandhi is sitting at a langar area in the Gurudwara with a mask on, and people around him are seen eating langar. By sharing this video, it is being claimed that Rahul Gandhi had gone to the gurudwara only to be photographed. His plate is empty and he is wearing a face mask. The claim says “Who eats langar with a mask on? Rahul Gandhi has not eaten langar prasad. Rahul Gandhi has insulted Gurdwara Sahib by doing this.” Vishvas News investigated the viral claim and found that the viral claim is false propaganda. Rahul Gandhi ate langar at Gurdwara Sahib.

While sharing the viral video, Twitter user @sagrolikarBJP has written “Acting superstars doing lunger with an empty plate and mask on. Insulting of gurudwara sheab. Always insulting and making fool to public, who asked them to fake acting in gurunakaji temple.”

To know the truth of the viral claim, we searched on Google using some keywords. We got a report related to the viral claim published on the website of Dainik Jagran on 28 January 2022. According to the information given in the report, Rahul Gandhi had eaten langar in the Gurudwara. In the picture used in the report, Rahul Gandhi can be seen eating langar.

Taking the investigation further, we started scanning the official YouTube channel of Congress. During this, we found a video related to the viral claim uploaded on 27 January 2022. In this 10-second video, Rahul Gandhi can be seen clearly taking off his mask and eating langar.

For more information, we reached out to Dainik Jagran’s Amritsar Chief Reporter Vipin Rana who covered Rahul Gandhi’s visit. We shared the viral video with him. He told us “the viral claim is false. Rahul Gandhi did eat the langar during his visit to the Harminder Sahib.”

At the end of the investigation, we did the social scanning of the Twitter user @sagrolikarBJP who shared this post. From scanning, we came to know that the user is influenced by an ideology. The user has more than 1300 followers on Twitter. Shivcharan Patil is active on Twitter since June 2010.