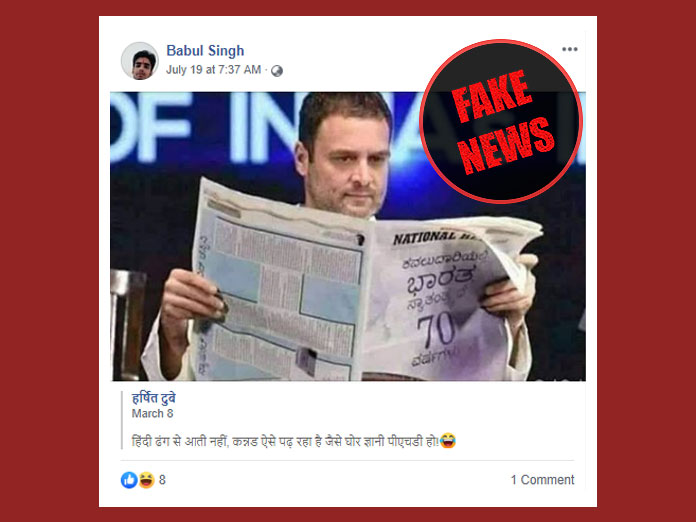 New Delhi (Vishvas Team) A photo is going viral on social media where Rahul Gandhi can be seen reading a newspaper. The photo has been posted with caption “A person who can’t read Hindi properly, is pretending to read Kannada.”In the photo, the newspaper’s front and last page can be seen printed in Kannada. In our investigation we found that Rahul Gandhi was reading National Herald English News paper and only the front and last pages were printed in Kannada for special commemorative edition.

In the viral post, Rahul Gandhi can be seen reading a newspaper. The photo has been posted with the caption “A person, who can’t read Hindi properly, is pretending to read Kannada.”

To confirm, we opened the June 12, 2017 epaper of the National Herald. On checking, we found that the first and last page of this newspaper was in Kannada but the main newspaper in the middle was in English.

After this, we examined the About Us section of National Herald Newspaper. We found that under National Herald umbrella, there are 3 newspapers and none of them is in Kannada. This newspaper is printed in only 3 languages, English (National Herald), Hindi (Nav Jivan) and Urdu (QAUMI AWAZ).

We talked to Zafar Agha, the Editor-In-Chief of the National Herald for more confirmation, who told us that National Herald newspaper is printed in 3 languages, English (National Herald), Hindi (New Life) and Urdu (Qami Voices). This newspaper does not print in Kannada. But on the occasion of the launch of the commemorative edition of National Herald in Bangalore, the first and last page of the newspaper was published in Kannada.

This post has long been shared on many social media platforms. It was recently shared by a Facebook user named Hershit Dubey.

Conclusion: In our investigation we found that Rahul Gandhi was reading National Herald English newspaper and only the front and last pages were printed in Kannada for special commemorative edition.