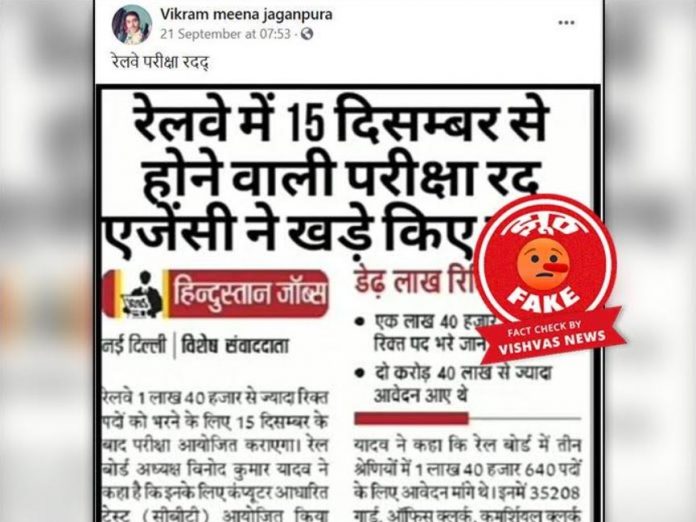 New Delhi (Vishvas Team). A newspaper clipping is shared with a claim that Railways have cancelled recruitment examinations.

Vishvas News received this post for fact check on its WhatsApp chatbot (+91 95992 99372). Our investigation revealed the claim is fake. The headlines have been tampered with in viral newspaper clipping. Railways have not canceled the examination to be held after 15 December.

To investigate the viral post, first of all we read this post carefully. We found the headline of the viral newspaper clipping contradicted the rest of the content. As the headline states the Railways have canceled the examination, the first line of article reads, “Railway will conduct examination after December 15 to fill more than 1 lakh 40 thousand vacant posts.”

On observing the clipping, we found the article has been published in Hindustan Jobs column. We searched on the Internet using keywords but we did not find any media reports about exam cancellation. However we accessed the original version of the viral paper clipping on a website. The original headline of Hindustan newspaper confirms that Railways have scheduled recruitment exams after 15 December.

According to the article published on 5 September by the LiveHindustan.com states, “Railway Recruitment Board (RRB) will start the Computer Based Test (CBT) recruitment exam for non-technical popular category (NTPC), Levan-1 and various posts (CEN 01/2019) from December 15.”

We also got a video tweet by Railway Minister Piyush Goyal in which RRB CEO and Chairman VK Yadav is announcing the examination date.

Vishvas News contacted senior editor of Hindustan newspaper to verify the claim. He clarified to us the headline in the clipping has been tampered and the font style is different from Hindustan’s font.

Social scanning of Facebook user Vikram meena jaganpura who shared the viral post revealed that he has 421 followers.

Conclusion: The headline is tampered in the viral post. Railways have not cancelled the recruitment examination to be held after 15 December.