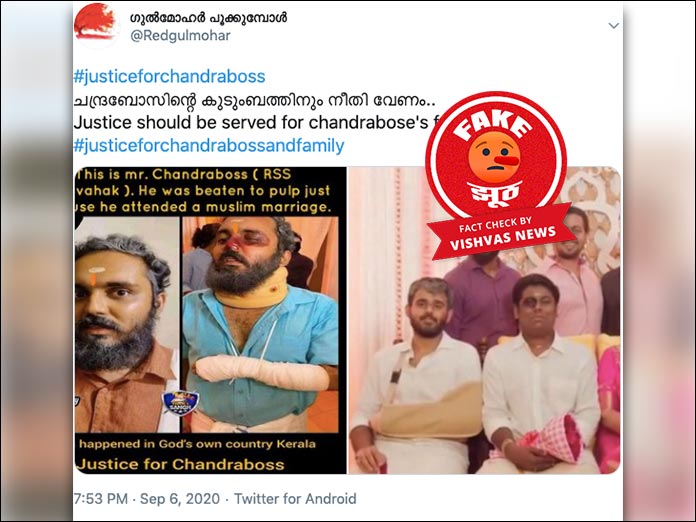 New Delhi (Vishvas Team). A viral post on social media claims that RSS Karyavahak Chandraboss was beaten to pulp for attending a Muslim wedding in Kerala. We spotted the post first on twitter and then on Facebook.

Vishvas News investigation revealed the claim to be fake and the man in the picture is actor Arjun Ratan. The pictures were from a comedy series ‘Smile Please’ on Karikku You Tube Channel.

Several users have shared a post on social media claiming that an RSS Karyavahak Chandraboss was beaten to pulp for attending a Muslim wedding in Kerala. The post has a picture of an injured man with an appeal for justice. The archived version of the post can be seen here.

We found the post is shared with another image with similar claims. The other picture shows a group photo where in all the eight men can be seen with wounds.

When we searched on the Internet with keywords “RSS Chandraboss beaten for attending Muslim wedding”. We could not find any news article in this context.

While we searched on the facebook and twitter with hastag “Justice for Chandraboss” we found similar claims written in Malayalam language.

As our first step in the investigation, we used the pictures on Google reverse image search tool. The search results landed us on Karikku YouTube Channel. Google search directed us to comedy series ‘Smile Please’ on the Karriku, we could confirm that the images in the viral claim were linked to the series.

Our investigation revealed that the poster image of the comedy series is the family photo shared in the viral claim and an injured character’s picture in the series played by actor Arjun Ratan is viral as RSS Karyavahak Chandraboss. The full video can be seen below.

Ratan’s Instagram clarified to us that the man in the viral picture is not Chandraboss.

As our efforts in approaching Karikku web channel at their media contact failed with no response, we contacted the state convenor of RSS organisation, Swadeshi Jagaran Manch Ranjith Karthikeyan to verify the claim. “This is a scene from web series and the claim is fake. There is no such incident reported,” said Karthikeyan.

He also sent us a clipping of the web series where in the character mentions his name as Chandraboss. The video can be seen here.

FB User Abdul Razak Kannoth is one among the several users who has shared the post with fake claims. Social scanning of his profile revealed that he has 458 friends and he lives in Dubai.

Conclusion: The claim that Chandraboss was beaten for attending a Muslim wedding in Kerala is fake. The pictures were from a comedy series ‘Smile Please’ on Karikku You Tube Channel.