Vishvas News in its investigation found the viral claim to be fake. Shiv Sena leader and MLA Aaditya Thackeray has not dropped ‘minister’ position from his Twitter bio. 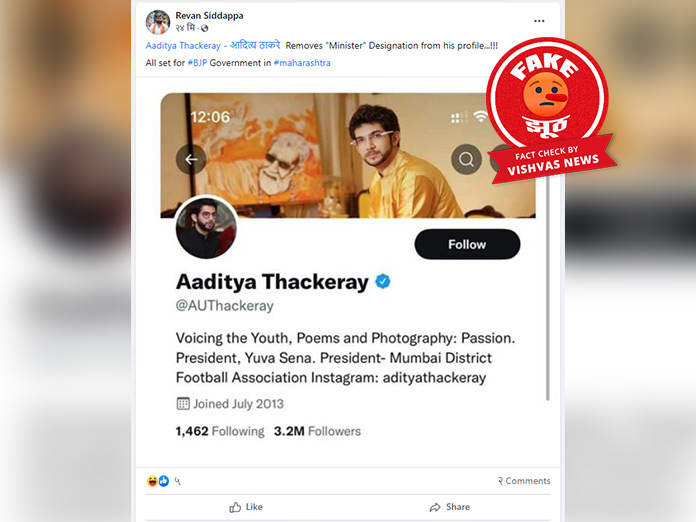 New Delhi (Vishvas News): Amidst the recent political chaos in Maharashtra where the MVA government looks unstable, Vishvas News came across a post and several news reports claiming that he dropped ‘minister’ position from his Twitter bio. Vishvas News in its investigation found the claim to be false.

Several users on social media are claiming that Shiv Sena leader and MLA and Cabinet Minister of Tourism and Environment for the Government of Maharashtra, Aaditya Thackeray has dropped his ‘minister’ position from Twitter bio.

Also some media organisations too carried the reports.

All set for #BJP Government in #maharashtra”

Other users too are sharing the same.

Vishvas News started its investigation with Google keyword search and found that certain news media organisation had carried the report.

We found a tweet by Gaurav Kadam, who said that he never had ‘minister’ in his bio.

According to a screenshot taken on April 28, 2022. He did not have a ‘minister’ bio on his Twitter account.

Also, according to a snapshot taken on 13 June, 2022, he did not have minister position on his Twitter bio.

In the next step of investigation we reached out to Aaditya Thackeray through WhatsApp and shared the claim with him, he said, “Fake news. Never put the bio on Twitter. Always been on insta.“

In the last step of investigation we did a social background search of the Facebook user who shared the claim, Revan Siddappa. The user is resident of Bangalore and is followed by 528 people.

Conclusion: Vishvas News in its investigation found the viral claim to be fake. Shiv Sena leader and MLA Aaditya Thackeray has not dropped ‘minister’ position from his Twitter bio.