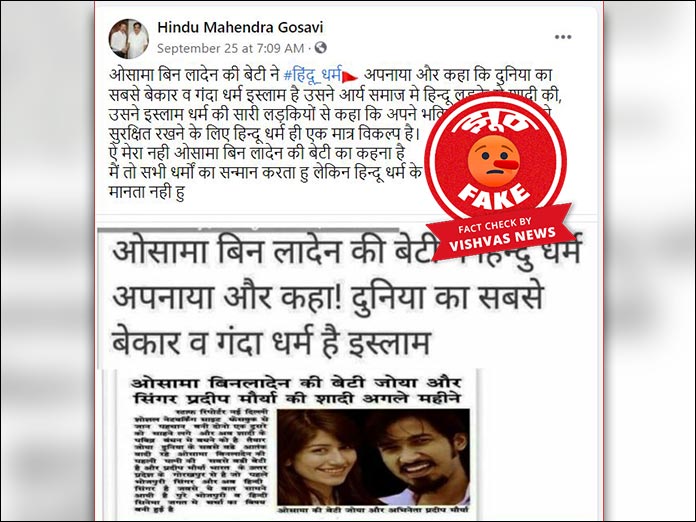 Vishvas News investigation revealed the claim to be fake. The woman in the clipping is Syra Yousuf, a Pakistani actress. Moreover we could not find any public records of bin Laden’s family that mentions about daughter named ‘Zoya.’

We searched on the Internet to know if Osama bin Laden’s daughter’s name is Zoya. We found information about Laden’s family on the CNN website.  However, it has no mention about Zoya anywhere, clarifying to us that it is a fictitious name.

In the next phase of the investigation, we searched by typing the keyword Pradeep Maurya in Google search. We found videos on many YouTube channels while most of his videos were on Gorakhpur Film City YouTube channel.

We could confirm that Maurya is the head of the channel and connected to him through the contact details provided in the channel. Maurya told us that he got married in 2018 but does not know any Zoya as mentioned in the viral post.

We searched for the picture published in the newspaper clipping using Google reverse image search tool. We found the woman’s picture on Urdu point website. We could confirm that the woman in the picture is Pakistani actress Syra Yousuf.

Similarly, we also searched for the man’s picture. We found it on Pradeep Maurya’s facebook page.

We also found this picture on a blog called Film City Gorakhpur  uploaded on 1 March 2014.

We could confirm that the image in the newspaper clipping was edited.

Social scanning of the FB user Mahendra Gosavi who posted the viral claim revealed that he lives in Surat, Gujarat.

Conclusion: The viral post is fake. Pradeep Maurya denied the claims shared about him on social media.