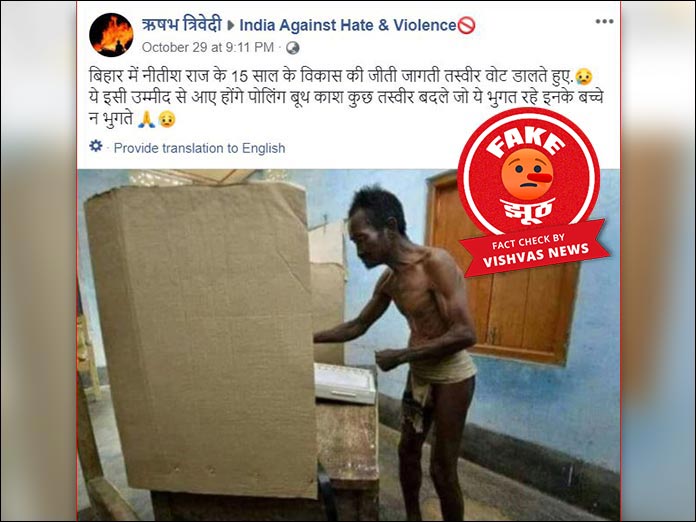 New Delhi (Vishvas News). A viral picture of a thin man in a voting booth is viral with a claim that it is from Bihar.

Vishvas News investigation revealed the claim is fake. We found that the viral picture was captured in 2014 in Assam.

Facebook user Rishabh Trivedi on 29 October uploaded a picture of a thin man in a voting booth on the Facebook group named India Against Hate & Violence’, claiming that he has come to vote with hopes that his children would not suffer, criticising Nitish for 15-year development in Bihar. The archived version of Facebook post can be seen here.

We searched the viral image on the Internet using Google reverse image search tool to find its original source. We found this picture in an article published by janjwar.com on 19 November 2019. It identified the man in the viral picture as a tribal.

We found the original picture in an article posted by the Hindu on 13 April 2014. It identified the voter as Tiwa tribesman of Karbi Anglong district in Assam. The picture credit helped us to identify the photographer Rituraj Kanwar.

Conclusion: The viral post is fake. Six year old picture of a voter in Assam is now viral as from Bihar.