Vishvas News fact-checked the viral post. In the investigation, it was found that the original video of Sunidhi Chauhan has been tampered with and an obscene song added to it. In the original video, she sang the song 'Waqt Ka Kya Bharosa'. 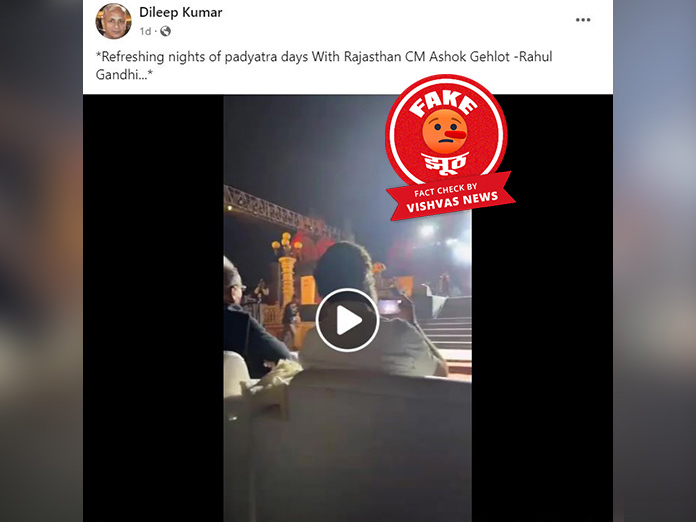 New Delhi (Vishvas News): Congress’ Bharat Jodo Yatra may have passed through Rajasthan, but the fake social media posts continue to be in circulation. Now, a video of Sunidhi Chauhan’s concert in Jaipur during the yatra is going viral with the claim that she sang an obscene Bhojpuri song. During this, former Congress President Rahul Gandhi and Rajasthan Chief Minister Ashok Gehlot were also present.

Rahul Gandhi, Ashok Gehlot can be seen in the video shared in the post. Further, Sunidhi Chauhan was reported to have been singing a Bhojpuri song.

The archived version of this post can be accessed by clicking here.

Vishvas News first took out several grabs from this viral video using the InVID tool. After this, online tools Yandex and Google reverse image search were used to find more information related to the video. We found a short clip of the viral video on YouTube channel. It was uploaded on December 19. In this, Sunidhi Chauhan can be seen singing the song ‘Waqt Ka Kya Bharosa’.

An investigation by Vishvas News revealed that on the occasion of completion of 100 days of Bharat Jodo Yatra, a music concert was organised on December 16 in Jaipur, the capital of Rajasthan. Apart from Rahul Gandhi, many senior Congress leaders and workers were present in the event. During that time, Sunidhi Chauhan sang many songs. But someone tampered with her video and changed the audio to include a song by Bhojpuri singer Pawan Singh and singer Indu Sonali.

Following up on the investigation, Vishvas News contacted Lokesh Sharma, OSD (Communication) to Rajasthan Chief Minister Ashok Gehlot, and shared the viral video with him. Sharma said a concert of Sunidhi Chauhan was organised at Albert Hall, Jaipur, during the Bharat Jodo Yatra. The audio of one of the video clips has been changed to make the objectionable video. This act has been done by mischievous elements.

Now it was the turn to investigate the user who made the fake video viral. Social scanning of Facebook user Dilip Kumar revealed that the user lives in New Delhi. He has more than a thousand friends.

Conclusion: Vishvas News investigated and found the viral post to be fake. Sunidhi Chauhan did not sing any obscene Bhojpuri song in front of Rahul Gandhi at a music concert held in Jaipur. The viral video is edited.