Fact Check: Tamil nameplate was not replaced with Hindi at Erode Junction, viral claim is fake

Conclusion: The viral post is fake. Tamil language nameplates have not been replaced with Hindi at Erode Junction, Tamil Nadu. The nameplates in Tamil, English and Hindi language have been placed on the building separately. 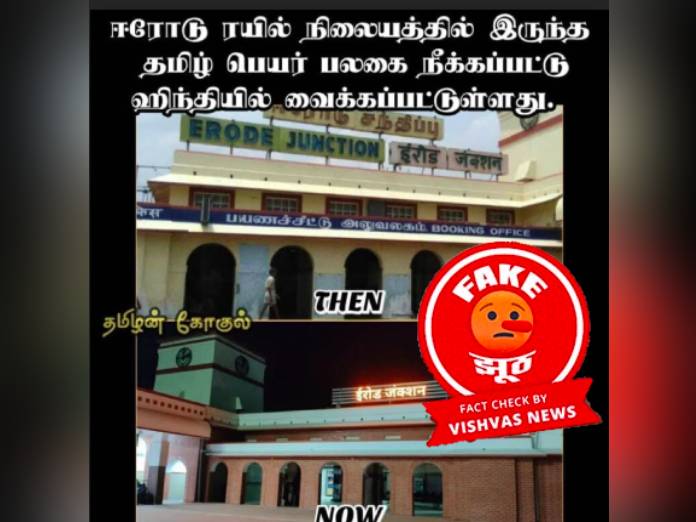 New Delhi ( Vishvas News).  A viral post on social media compares two pictures of Erode Railway Junction, Tamil Nadu where the first one shows name board in three languages (Tamil, English and Hindi) and the second, only with Hindi. It is shared with a claim that Tamil language has been removed and replaced with Hindi.

Vishvas News investigation revealed the claim is fake. Railway PRO clarified that the name boards in three different languages which was earlier placed together is now separated and kept in different sides of the building.

A viral post alleges that Tamil language name board at the Erode Railway Junction was replaced with Hindi.

We searched on the Internet for news and found an article in the Hindu about Congress district vice president condemning the imposition of Hindi in name boards at the Erode Railway Junction. “In a letter to the Railways Minister, he said all the name boards at the junction were in Tamil and English so far. However, ahead of the Southern Railway General Manager’s inspection to the junction recently, the name boards at parking stands, entrance and offices were replaced with new ones in Hindi, Tamil and English,” stated the article.

Vishvas News contacted G Maria Michael, Southern Railways PRO, Salem Division for clarification. “The viral claim is fake. Tamil language nameplate has not been replaced with Hindi. All the three language boards that were put together earlier on the exterior of the Erode junction is currently placed separately,” he said.

We searched for the image of the newly renovated junction building and found it in a tweet posted on 3 February.

We observed that the exterior parts of the junction has Tamil language nameplate in the centre along with English and Hindi at its right and left respectively.

Social scanning of the Facebook page that shared the viral post revealed that it has 4,40,696 followers and is active since September 2017.

Conclusion: Conclusion: The viral post is fake. Tamil language nameplates have not been replaced with Hindi at Erode Junction, Tamil Nadu. The nameplates in Tamil, English and Hindi language have been placed on the building separately.