Fact Check: The dancers in this video are real humans, not robots

Vishvas News in its investigation found that this claim is false. Both the dancers seen in the video are real humans, not robots. 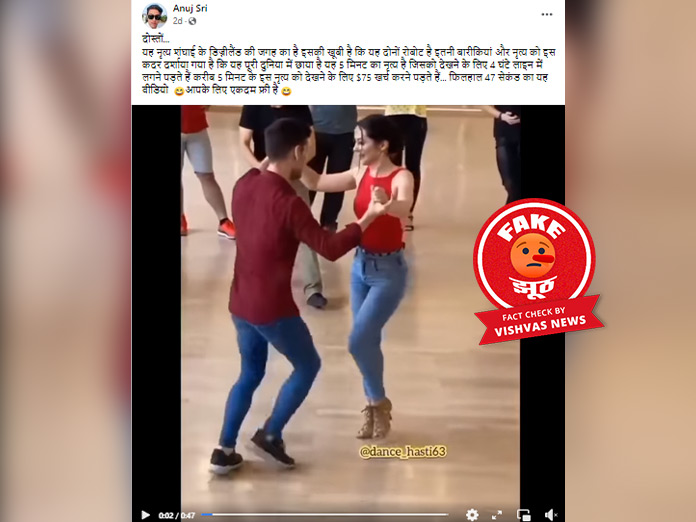 New Delhi (Vishvas News). A video is going viral on social media in which two dancers can be seen performing. It is being claimed with the post that these two dancers are not humans but robots. Vishvas News in its investigation found that this claim is false. Both the dancers seen in the video are real humans, not robots.

It is being claimed with the viral video, ” translated: friends…this video is from Disneyland in Shanghai, its specialty is that both dancers are robots. So much detail and the dance is depicted in such a way that it is a shadow of the whole world. It’s a few minutes long dance performance and to watch it, you have to wait in line for 4 hours. it costs $75 to watch this 5-minute dance… for now, this 47-second video is Absolutely free for you.”

To check this video, we put this video in the InVid tool and extracted its keyframes. Then searched these keyframes on Google reverse image. We found the video of these two dancers uploaded from another angle on Instagram page named dimaydilara in 2020. According to the caption accompanying the post, the performance was filmed during the Bachata Stars Weekend event in Moscow, and the dancers seen in the clip are Russian Bachata dancers Dima and Dilara.

We found many more videos of these two dancers Dima and Dilara on this page.

We also found this video uploaded in 2020 on an Instagram page named dj.don.corazon. According to the description written here also, this video was filmed during Bachata Stars Weekend in Moscow in 2020 and the Russian dancers seen here are Dima and Dilara.

Vishvas News contacted Jack Lu, a Chinese journalist covering Shanghai, regarding this matter. “The video is not from China. This claim is false. No such robots perform at Shanghai Disneyland,” he said.

We have also reached out to dancers Dima and Dilara in this regard. This fact check will be updated as soon as their response is received.

This post was shared by a user named Anuj Sri on a page named Laughing Raho India. The page has 551.3K members on Facebook.

Conclusion: Vishvas News in its investigation found that this claim is false. Both the dancers seen in the video are real humans, not robots.