Vishvas News in its investigation that this photo is edited. The man in the original picture wasn’t PM Narendra Modi. 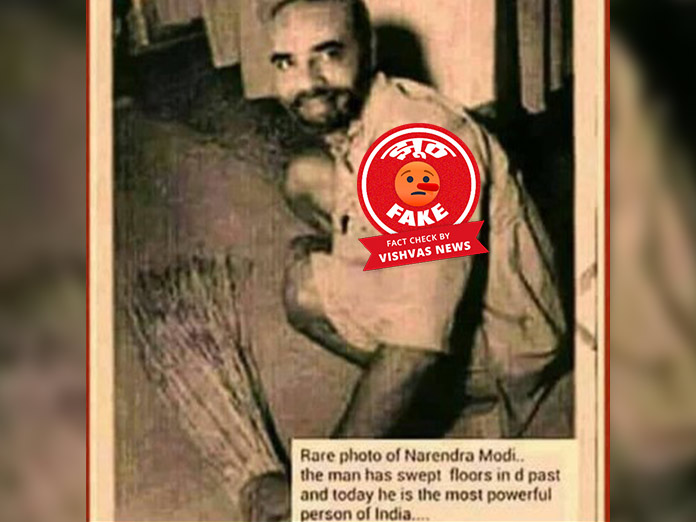 New Delhi (Vishvas News). An edited photo of a man sweeping a floor is going viral on social media with a claim that this is PM Modi’s old picture. We received this claim on our tipline number for fact-checking. When we searched, we found that this photo has gone viral several times in the past few years. Vishvas News in its investigation found that this photo is edited. The man in the original picture wasn’t PM Narendra Modi.

To investigate the viral photo, we first searched it with Google reverse image. We found that this photo had gone viral on Facebook in 2013, 2014, and 2016 as well.

We searched this picture using Yandex reverse image search. We found this photo on a website called Old Indian Photos. It was very similar to the viral photo, the only difference was that the face of the man was different. It wasn’t PM Narendra Modi. The description along with the photo read, ‘One of the Untouchables of India holding a broom, which he uses to clean the streets and houses – Associated Press 1946’

On further searching with keywords, we were able to track down this photo on the website of AP Images. According to this, the photo was clicked on June 2, 1946. The name of the photographer was Max Desfer. The description with the photo read “One of India’s “untouchable” caste holds the broom he uses in sweeping out streets, yards and houses, June 2, 1946. The untouchables, or Harijans (Children of God) as they are called by Gandhi, do all of the nation’s “unclean” work. Gandhi repeatedly said the curse of oppressive British rule was a just punishment for the sin of untouchability that high-caste Hindus have practiced for many centuries. (AP Photo/Max Desfor)”

On further searching this issue with keywords, we found a piece of news published on the ‘Janta Ka Reporter‘ website on 20 January 2016. The news was about an RTI in this matter. According to the story, an activist from Ahmedabad had filed RTI to know the veracity of the viral photo. The reply received was, ‘The information sought is not part of the record, but it may be noted that the photograph has been tampered with. The person in the picture is not Narendra Modi.

One India also published this news on 22 January 2016. According to this, the viral photo is edited.

For more information, we contacted Parag Patel, the RTI activist who filed the RTI in this regard. He told us “Yes, I filed an RTI in regard to this image and also received a reply from the PMO. The reply clearly stated that the photo is edited and the man in the image seen sweeping the floor isn’t PM Narendra Modi.” Parag Patel also exclusively shared with us the copy of the RTI reply that he had received. It can be seen below.

Conclusion: Vishvas News in its investigation that this photo is edited. The man in the original picture wasn’t PM Narendra Modi.