Fact Check: The Person In The Video Is Not An IPS Officer, viral claim is fake

The person in the video is not IPS officer Shailja Kant Mishra, but Nitish Rajput, a business head and social media influencer. 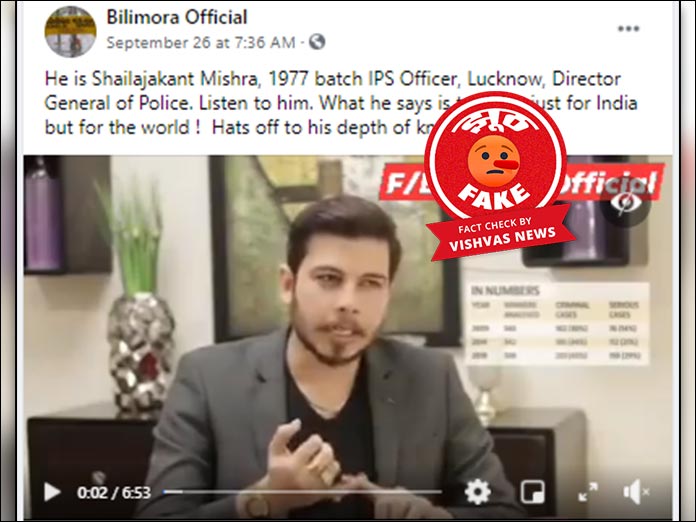 New Delhi (Vishvas News). A viral video on social media features a man speaking about criminalization in politics. It is shared with a claim that he is an IPS officer from 1977 batch and Lucknow’s Director General of Police Shailajakant Mishra.

Vishvas News investigation revealed the person in the video is not IPS officer Shailajakant Mishra, but Nitish Rajput, a businessman and social media influencer.

The Facebook page Bilimora Official uploaded a video on 26 September 2020 writing, “He is Shailajakant Mishra, 1977 batch IPS Officer, Lucknow, Director General of Police. Listen to him. What he says is true not just for India but for the world! Hats off to his depth of knowledge..”

The archived version of  the post  can be seen here .

On observing the video, we found a watermark writing ‘Nitish Rajput’ that appears several times in between.

We first uploaded the video to InVID tool and used the keyframes to search on the Internet. We also searched for information about Nitish Rajput. We found the original video uploaded by YouTube channel Nitish Rajput on July 26, 2020. We also found the same video of Nitish Rajput on his Facebook, Instagram and Twitter.

Rajput’s Twitter and Instagram profile revealed that he is an engineering graduate and is a businessman by profession.

A post in his Instagram profile shows that he was featured in an article by the Hindustan Times.  According to the article, “Nitish Rajput, the 28-year-old Business Head of a successful MNC in the IT sector… Nitish is today based in New Delhi and apart from showing his business acumen in the IT sector, he is also a popular social media personality.”

We searched for information about IPS officer Shailajakant Mishra.  We found him on UPBTVP website. He is UPBTVP’s Vice Chairman and a retired IPS officer.

We contacted Nitish Rajput over the viral claim. He clarified to us that he is the person in the video said and is a business head by profession and not an IPS officer.

Social scanning of Facebook page Bilimora Official that shared the video with viral claims revealed that it has  2,551 followers.

Conclusion: The person in the video is not IPS officer Shailja Kant Mishra, but Nitish Rajput, a business head and social media influencer.