FACT CHECK: The person in this photo isn’t UP Chief Minister’s brother 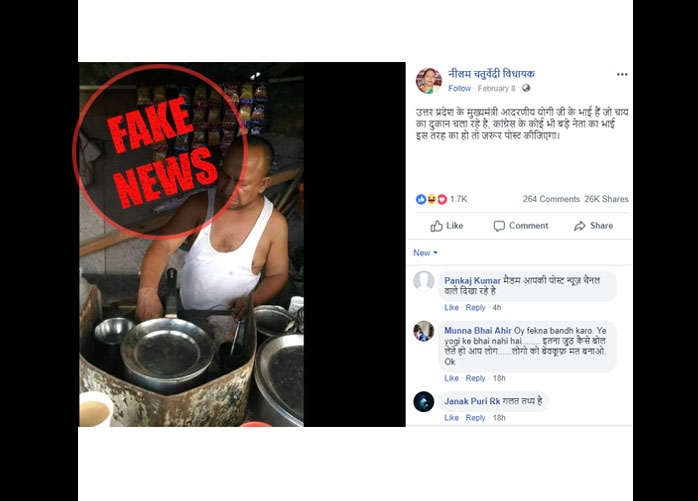 The post by Neelam Chaturvedi has been shared over 26,000 times so far on Facebook. On Stalkscan searching of Neelam Chaturvedi’s Facebook profile, we found that she has more than 5000 followers and she lives in Ghazipur(UP). Though the user name reads ‘vidhayak’ (legislator), there is no mention of this in her intro anywhere. Neelam Chaturvedi’s name is nowhere in the list of legislators present on the website of Uttar Pradesh Assembly.

We did Google Reverse Image search of the photo but found nothing. When we did the same search in another tool – Yandex, we found a video showing combination of the same pics being used in the viral post.

This photo was first shared on August 21, 2017 by a person named Gaurav Chugh on a social platform Busy.org. The tags he wrote in this post are Street, Delhi, India and Tea Maker. No further information was provided in this post by him.

To further investigate this post, we started collecting the details of the family members of Yogi Adityanath. According to a video shown on ABP News, the current Chief Minister of Uttar Pradesh has 3 brothers and 2 sisters. The two brothers of CM Yogi are younger to him and one elder to him. Two of his brothers can be seen in this video aired on ABP News. One of his youngest brothers is a journalist and his elder brother is a farmer.

The third brother of Yogi Adityanath is a subedar in Indian Army. We were able to find his photograph in a news story published on India Today website.

Conclusion: In our investigation we found that the person in this photo is not Uttar Pradesh Chief Minister Yogi Adityanath, and not even related to him. The viral post is false.