Fact Check: The Person in This Video is Not Himalaya Company Owner, Viral Claim is Fake 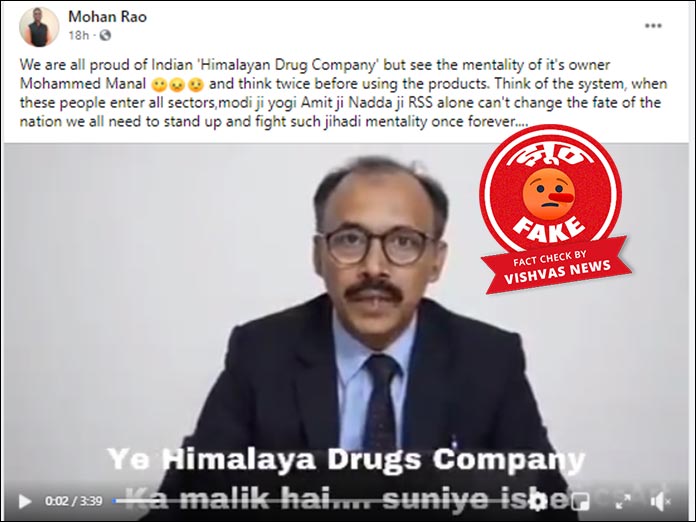 New Delhi (Vishvas Team). A viral video on social media features a man speaking about Muslim dominance in judiciary, administrative services and police. The post is shared wth a claim that he is the founder of Himalaya Drug Company.

Vishvas News investigation revealed the claim is fake. The man in the video is not Mohammed Manal.

Facebook user Mohan Rao shared the video writing, ” We are all proud of Indian ‘Himalayan Drug Company’ but see the mentality of it’s owner Mohammed Manal and think twice before using the products…”

We first extracted the keyframe of this video using the Invid tool. We searched on the Internet using Google reverse image search tool. We found an article in The Siasat Daily published on 7 September, along with a screenshot of the viral video. According to the news, this “lawyer” had asked Muslims to ensure representation in the judiciary, IT, government, law sectors instead of mourning the Babri demolition.

We also found this video on Facebook page Naqi Ahmed Nadwi Page. The profile picture on this page also had a photo of the same person in the viral video.

We also found Nadwi’s  LinkedIn account  which clarified to us that he is an administrator at Madaan, a sand-mining company based in Saudi Arabia. We contacted Nadwi through Facebook Messenger. This news will be updated after he responds.

We searched on the Internet for information about Mohammad Manal. According to the company’s site , Mohammed Menal was the founder of the Himalaya Drug Company, established in Dehradun in 1930.

We spoke to the spokesperson of Himalaya to verify the claim. “This viral post is fake.  Mohammed Manal is the founder. He died in 1986. We also had a tweet on September 27 in this subject,” the spokesperson said.

Conclusion: The man speaking of Muslim dominance in the video is not Mohammed Menal, the founder of the Himalaya company.