Fact Check: The Person Seen In The Video Is Not A Pakistani Journalist, But An Indian Motivational Speaker 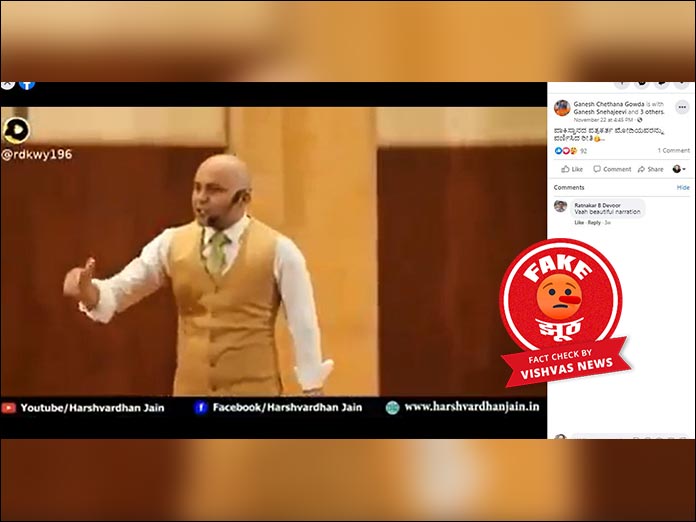 New Delhi (Vishvas News): A video going viral on social media claims that the person in the video is a Pakistani journalist. In the video, the person can be seen praising Indian Prime Minister Narendra Modi.

When Vishvas News investigated we found that the person in the video is not a Pakistani journalist, but Harshvardhan Jain, an Indian motivational speaker.

After watching the video properly, the social media handles by the name Harshvardhan Jain were clearly seen.

Vishvas News extracted screengrabs of the video using the InVID tool and search the screengrabs on Google using the Google Reverse Image Search tool with the keyword “Harshvardhan Jain”. During the search, we found the original video uploaded on the YouTube channel named Harshvardhan Jain on August 14, 2020.

Harshvardhan Jain is a motivational speaker, business management consultant, and leadership coach, according to Harshvardhan Jain’s YouTube channel as stated in ‘About Us’ and his ‘Instagram profile’. He hails from Jaipur as per his profile.

At last, we performed the social scanning of the Facebook user Ganesh Chethana Gowda who shared the video with a fake claim. We found that the user is based out of Karnataka.

Conclusion: When Vishvas News investigated the viral post, it was found that the person in the video is not a Pakistani journalist, but Harshavardhan Jain, an Indian motivational speaker.