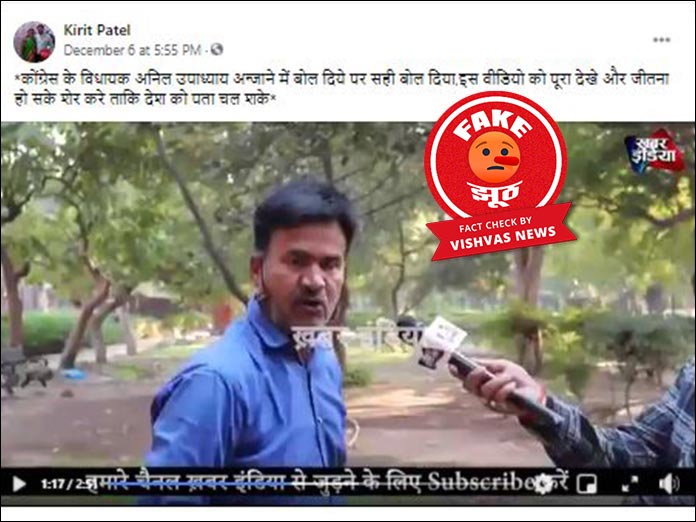 New Delhi (Vishvas News): A video doing rounds on social media claims that the person shown in the video is Congress MLA, Anil Upadhyay. In the video, the person can be heard supporting the Farmer’s Bill.

When Vishvas News investigated the post, it was found that the person shown in the video is not a Congress MLA but a contractor by profession, Sudhir Pandey. Vishvas News had earlier investigated similar posts that had gone viral in the name of imaginary MLA Anil Upadhyay.

Facebook user Kirit Patel uploaded a video on December 6, 2020, claiming: “Whatever Congress MLA Anil Upadhyay said in this video is true, watch the video completely and share it so that the country knows.”

Vishvas News performed Google reverse image search of the screengrabs obtained through the InVID tool. We use the keyword Khabar India during Google reverse image search. During the search, we found the original video on a YouTube channel named Khabar India. The video was an extended version of the video going viral. The video was uploaded on November 28, 2020.

We contacted the office of ‘Khabar India‘. They told that the person appearing in the viral video is not an MLA, but Sudhir Pandey, who is a contractor by profession. We contacted Sudhir Pandey and he said, “I am the one in the video. My name is Sudhir Kumar Pandey. I live in Delhi, I am not associated with any party currently. However, I am a big supporter of BJP as a political party. ”

We did social scanning of Facebook user Kirit Patel, who made the video viral with fake claims. He hails from Mumbai and has 1,033 friends on Facebook.

Conclusion: When Vishvas News investigated the viral post, it was found that the person shown in the video is not a Congress MLA, but a contractor by profession, Sudhir Pandey. Vishvas News has also investigated several such posts in the past that have gone viral by the name of imaginary MLA Anil Upadhyay.