Mamta Banerjee was not learning scooter riding in the viral video, she was protesting against a fuel price hike by riding an electronic scooter. The claim with the viral post is misleading. 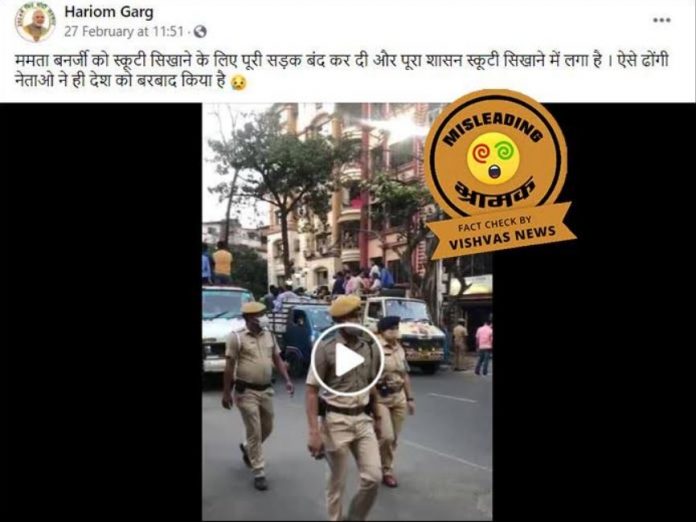 New Delhi (Vishvas News): A video of Mamata Banerjee, chief minister of West Bengal is getting viral on social media. One can see the police force on the road and Banerjee riding a scooter with the help of some people. It is being claimed that she was learning scooter riding and for that police have closed the full road.

Vishvas News investigated the video and found that the claim with the viral post is misleading. Mamata Banerjee holds a protest against a fuel price hike where she drove an electric scooter. Few people were helping her in riding a scooter as she doesn’t know how to ride a scooter.

Facebook user Hariom Garg posted the video with the caption in Hindi that roughly translates to: ‘In order to teach how to drive a Scooty to Mamata Banerjee, the entire road has been closed and the authority is engaged in the task. Such hypocritical leaders have destroyed the country.’

Vishvas News used the Invid tool to get the screengrabs from the viral video and then run a Google reverse image search on one of the screengrabs. We found the video in many media reports. As per these reports, Mamata Banerjee was protesting against the hike in prices of petrol, diesel, and LPG cylinders and tried her hand at an electric scooter while protesting. She was not learning scooter riding. The security personnel and people around her were helping her in riding the scooter.

To know more about the viral video we contacted J K Vajpayee, West Bengal editor, Dainik Jagran. He told us that the claim with the viral post is not true. People were not giving her scooter riding training. She was holding a protest on February 25 against a fuel price hike by riding an electric scooter.

We scanned the account of Facebook user Hariom Garg who shared the viral photograph. We found that he hails from Bikaner, Rajasthan.

Conclusion: Mamta Banerjee was not learning scooter riding in the viral video, she was protesting against a fuel price hike by riding an electronic scooter. The claim with the viral post is misleading.