Fact Check: The woman in this video is not Hathras victim’s mother, viral claim is fake 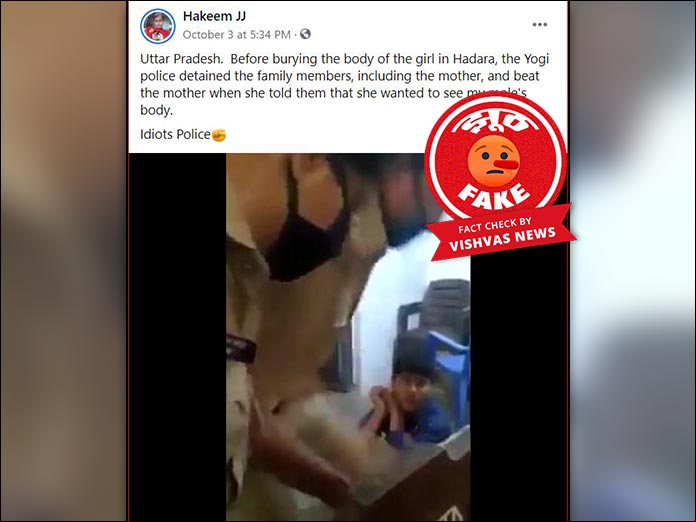 New Delhi (Vishvas News). A viral video of police abusing a woman is shared with a claim that the woman, mother of the Hathras incident victim was beaten by police for pleading to see her daughter’s body before it was cremated.

Vishvas News investigation revealed the claim is fake. The video is of an old incident in Hamirpur, Uttar Pradesh and has no link with Hathras incident.

Facebook user Hakim JJ uploaded a video on 3 October claiming that police abused Hathras victim’s mother while she pleaded to see her girl’s body before cremation.

Vishvas News first observed the viral video. It shows a woman sitting on the floor with a child. A policeman can be seen seen kicking and yellling at this woman. We uploaded the video to InVID tool to extract keyframes. We searched using Google reverse image search tool.

We found a news website Hindi Pardaphash that used the screenshots of the viral video. The article stated that an inquiry was ordered after a woman was abused at Sadar Kotwali in Hamirpur, UP.

We searched the newspapers of Hamirpur to clarify the incident. According to an article published by Dainik Jagran on September 30, the investigation of this case was handed over to Sadar Circle Officer Anurag Singh.

We contacted Singh for more information. He told us that the viral video has nothing to do with Hathras. The case was of Hamirpur. Since the incident, the line has gone to the police officer.

Social scanning of the user who shared the viral post revealed that he is from Calicut and has over 1,100 followers on Facebook. He is active since June 2017.

Conclusion: The viral claim is fake. The old video of Hamirpur is viral relating to Hathras incident.