Fact Check: These pictures of teenage boy rescuing a fawn are from 2014, Bangladesh, not Assam 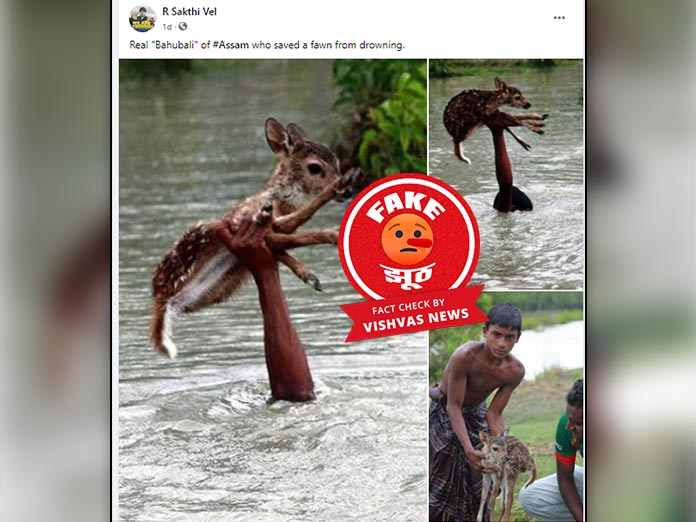 New Delhi, Vishvas News. Amid the outbreak of floods in Assam, pictures of a boy are going viral on social media, in which this boy can be seen trying to rescue a fawn from the flood waters. These pictures are going viral on social media with the claim that the incident happened in Assam. Vishvas News found in its investigation that this claim is false. Actually, these pictures are from 2014, Bangladesh. These pictures have no relation with the current floods in Assam.

In these viral pictures, a boy can be seen trying to save a baby deer (fawn) from the flood waters. The caption with the pictures reads, “Real “Bahubali” of #Assam who saved a fawn from drowning.”

We searched these pictures through Google Reverse Image.

We found a report of “Daily Mail” news portal about the floods in Bangladesh in February 2014. This news story used similar pictures of boy and deer. According to the report, the incident is from Noakhali area of ​​Bangladesh. According to the news published on 6 February 2014, “A brave boy risked his life fearlessly and showed amazing bravery to save a helpless fawn from drowning. This boy named Belal showed his fearlessness. The incident took place in Noakhali, Bangladesh, when the deer separated from her family during torrential rains and rapidly rising floods.”

According to information available on both these websites, these photographs were taken by wildlife photographer Hasibul Wahab during the 2014 floods in Noakhali, Bangladesh.

We contacted photographer Hasibul Wahab on the mail for further confirmation in this matter. In response to the question asked about these photos, he told us, “I took these pictures in 2014 during Bangladesh floods”.

Many people are sharing these photos with false claims on social media. One of them is a Facebook user named R Sakthi Vel. According to the profile, the user is from Chennai and has 643 followers on Facebook.

Conclusion: Vishvas News found in its investigation that this claim is false. Actually this picture of a boy rescuing a deer child is from 2014, Bangladesh. These pictures have no relation with the current floods in Assam.