Fact Check: This image is from Sankalp Rally held in 2019, viral claim is fake 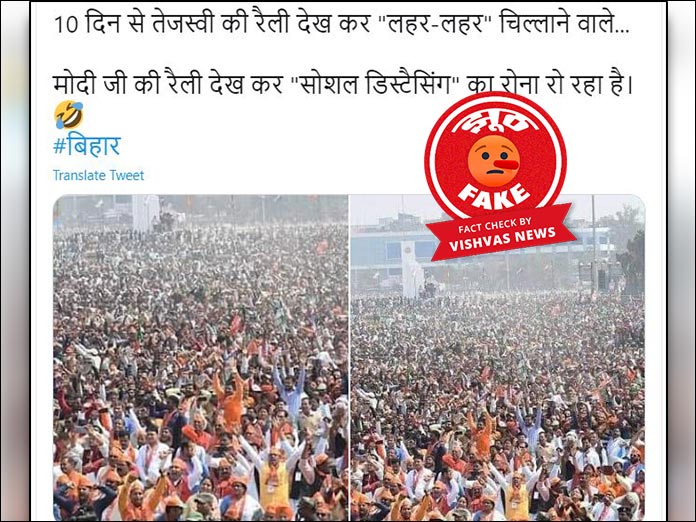 New Delhi (Vishvas News). In the midst of the ongoing campaign for Bihar assembly elections, a picture of a huge crowd is viral on social media with a claim that it is of Prime Minister Narendra Modi’s recent election rally in the state.

Vishvas News investigation revealed the claim is fake. The picture viral in the name of Bihar election campaign is of the National Democratic Alliance (NDA) rally held in Patna in March last year.

Twitter user NationFirst#SAFFRON shared the viral picture (archive link ), with a claim that it is from PM Narendra Modi’s recent Bihar election rally.

Many users have shared these pictures on Facebook as picture from PM’s election campaign rally in Bihar.

Bihar assembly elections are held in 3 phases and the first phase started on October 28. The second phase and the third phase are scheduled on 3 and 7 November.  According to the report published in Dainik Jagran, the rally was addressed by Prime Minister Narendra Modi in Sasaram, Gaya and Bhagalpur on 25 October 25, before the first phase of Bihar assembly elections.

In the available videos and photos of these three rallies, we could not find any picture that matches the viral picture. We observed that the public is not seen on open ground in the recent rallies, but inside the tent.

We used Google reverse image search tool to find the original source of the viral image. We found this picture on narendramodi.in website clarifying it to be from National Democratic Alliance (NDA) rally held in Patna, Bihar on 3 March 2019.

We accessed other news reports confirmed that Narendra Modi addressed the Sankalp Rally of the National Democratic Alliance  during the last Lok Sabha election at the historic Gandhi Maidan in Patna, accompanied by Nitish Kumar and Ram Vilas Paswan on stage.

Vishvas News contacted Jagran.com’s Bihar in-charge Amit Alok to verify the claim. “So far, there have been three rallies of Prime Minister Modi in Bihar and this viral picture is not of any of these rallies,” said Alok.

The viral pictures can be seen in video uploaded by Narendra Modi’s verified YouTube channel.

The user who shared the viral picture has 7,925 followers on twitter.

Conclusion: The viral post is misleading. The picture of Sankalp rally held at Gandhi Maidan in Patna in 2019 is viral as from PM’s recent election rally.