Fact Check: This image is not from Yogi Adityanath’s rally in Bihar, viral claim is fake 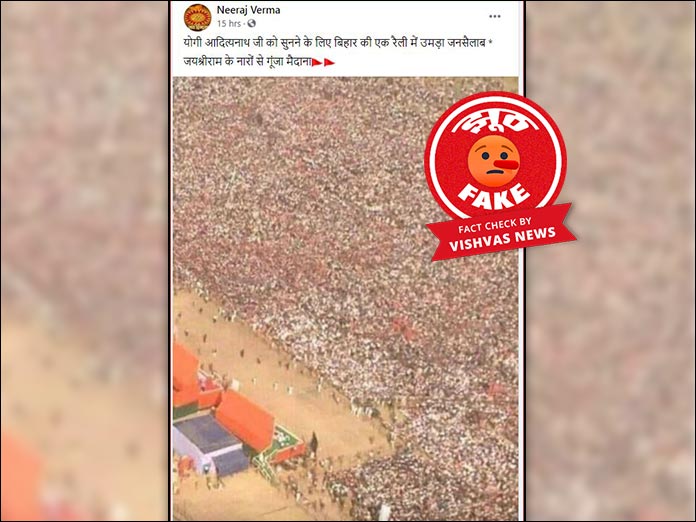 New Delhi (Vishvas News). A picture of a huge crowd is shared with a claim that it is from Uttar Pradesh Chief Minister Yogi Adityanath’s rally in Bihar.

Vishvas News investigation revealed the claim is fake. The viral picture is from Prime Minister Narendra Modi’s Kolkata rally in 2014. It is not from Adityanath’s rally in Bihar as shared in the claim.

Facebook user Neeraj Verma uploaded a picture in facebook group Modi Sena on 21 October writing, “Mass crowd gathered at a rally in Bihar to listen to Yogi Adityanath Ji. The plains echoed with slogans of Jayshreeram.” The archived version of the Facebook post can be seen here.

Many other users have shared this picture on different social media platforms.

We first observed the viral picture and identified that it is old as the quality of the photo was quite poor. We searched this image on the Internet using Google reverse image search tool and found it in an article published on 5 February 2014 by Deshgujarat website. The article reads, “The state where BJP has negligible presence in terms of elected representatives, offers this much crowd to Modi’s rally.”

We searched for the news reports using keywords (Narendra Modi’s 2014 rally in Kolkata).  We found a video uploaded by Newsx on its YouTube channel describing as mega rally in Kolkata, West Bengal where prime ministerial nominee Narendra Modi was scheduled to address the public at Brigade Parade Grounds.

We found a picture on Getty Images website that had similarities with the viral picture. We could identify the green color carpets and the blue color on the tent behind the stage in these pictures.

Several news reports have reported that UP Chief Minister Yogi Adityanath has been made the star campaigner for Bihar elections. Adityanath has started campaigning from 20 October 20 and has held many rallies in Bihar so far. However, this viral picture is not from any of his rallies.

Vishvas News contacted Amit Alok, Jagran.com‘s Bihar in-charge to verify the claim. He told us that though Yogi Adityanath’s rallies have started in Bihar, this viral picture is not from Bihar.

Social scanning of the user who shared the viral picture revealed that he is influenced by a particular ideology. We could not get more information from his account.

Conclusion: The viral post is fake. The picture of Narendra Modi’s 2014 rally is now viral with fake claim as of Yogi Adityanath’s rally in Bihar.