The viral post is fake. The original picture of Rahul Gandhi has been edited with Mia Khalifa’s picture and shared with false claim. 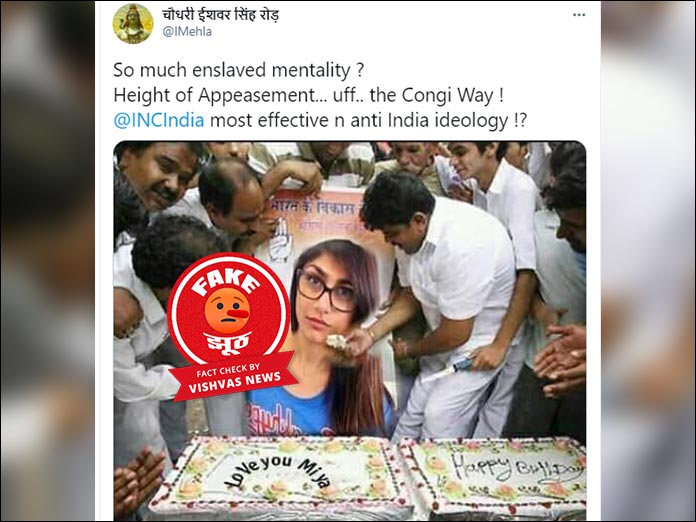 New Delhi (Vishvas News). A picture allegedly of Congress workers feeding cake to Mia Khalifa is viral on social media recently after her tweet in support of the farmers movement.

Vishvas News investigation revealed the claim is fake. The picture of Rahul Gandhi has been replaced with Khalifa using photo editing tools.

Twitter user shared the picture writing, “So much enslaved mentality? … the Cong Way! @INCIndia most effective and anti India ideology !? The archived version of the post can be seen here.

We searched this image on Google using reverse image tool and found this on gettyimages.in. We could identify the original picture of Rahul Gandhi has been replaced with Mia Khalifa in the viral picture. The description reads, “New Delhi, India: Indian Youth Congress supporters cut a huge birthday cake during celebrations for the 37th birthday of Rahul Gandhi, leader of the youth wing of the Congress Party, in front of Congress Party President Sonia Gandhi’s residence in New Delhi, 19 June 2007. Indian Youth Congress supporters organised the birthday celebrations for Rahul Gandhi, Congress Party member of parliament (MP) and son of the Congress-led UPA government chairperson Sonia Gandhi. AFP PHOTO / RAVEENDRAN (Photo credit should read RAVEENDRAN / AFP via Getty Images).”

We noticed the similarities in the viral and original photograph.

We contacted photo journalist Ravi Ravindran for clarification. “I took this picture in 2007. There was a photo of Rahul Gandhi in this picture,” he said.

Social scanning of Twitter user who shared the claim revealed the profile has 255 followers and is active since 2013.

Conclusion: The viral post is fake. The original picture of Rahul Gandhi has been edited with Mia Khalifa’s picture and shared with false claim.