Fact Check: This is a photo of a Marathi actress, not a painting

Vishvas News in its investigation found that the claim is false. This is actually a photo, not a painting. 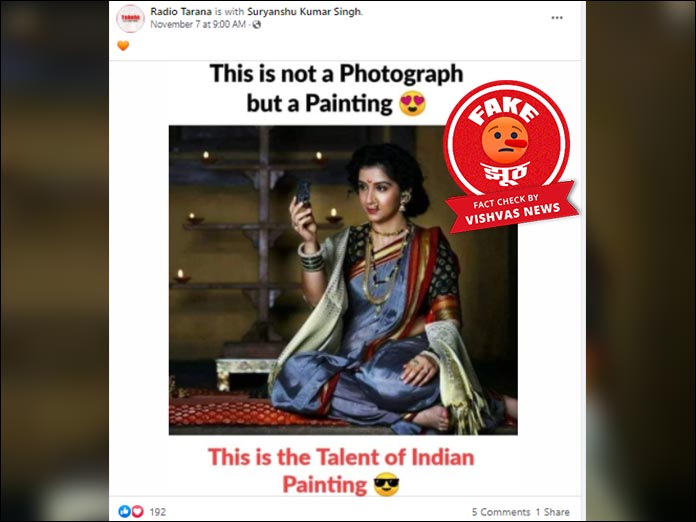 New Delhi (Vishvas News)- A picture is going viral on social media in which a woman can be seen in ethnic attire. It is being claimed with the post that this is not a photo but a painting made by an artist. Vishvas News in its investigation found that the claim is false. This is actually a photo, not a painting.

Facebook page Radio Tarana shared the post, which read “This is not a Photograph but a Painting: This is the Talent of Indian Painting.”

Vishvas News did a Google reverse image search to verify this post. We found this picture uploaded on 13 October 2018 on the Instagram account of a Marathi actress named Snehlata Vasaikar. According to the caption, this picture was taken by a photographer named Prithviraj_Babar.

We contacted Prithviraj Babar over phone regarding this. He confirmed that the viral claim is fake and that it was actually a picture that he had captured with his own camera in 2018. He shared with us some more pictures from this photo shoot, which can be seen below.

After scanning the social account of Radio Tarana, the page that shared the fake post, we found that the page has 805,044 followers.

Conclusion: Vishvas News in its investigation found that the claim is false. This is actually a photo, not a painting.