Fact Check: This is not the picture of Ram Temple in Ayodhya, viral claim is fake 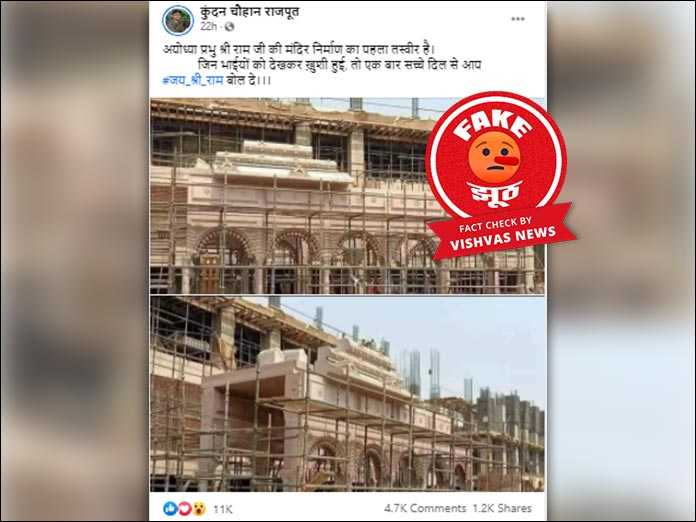 New Delhi (Vishvas News). A picture of a temple like structure under construction is shared with a claim that it is of Ram Temple in Ayodhya.

Vishvas News investigation revealed the claim is fake. The photos Kashi Vishwanath Temple Corridor under construction in Varanasi is viral with fake claim.

We searched on the Internet using Google reverse image tool to find the original source of the viral picture.  We found these pictures in a news article published on 27 October by the Jagran.com that identified the picture as Kashi Vishwanath Temple Corridor in Varanasi, Uttar Pradesh.

The Hindustan Times website has also published this picture captioned, “The main complex of the Kashi Vishwanath Temple under construction.”

We contacted Dainik Jagran’s Varanasi correspondent Shashwat Mishra to verify the claim. “These pictures are of Kashi Vishwanath Temple Corridor that is under construction,” said Mishra.

Social scanning of the user who shared the viral post revealed that he is from Bihar and has 1,712 followers on facebook. He is active since September 2017.

Conclusion: The viral post is fake. The photos are Kashi Vishwanath Temple Corridor in Varanasi and not Ram Temple in Ayodhya.