Fact Check: This medicine can not cure Dengue in 48 hours, the viral claim is misleading

The post claiming that the medicine named EUPATORIUM PERFOIAM 200 can cure dengue in 48 hours is misleading. 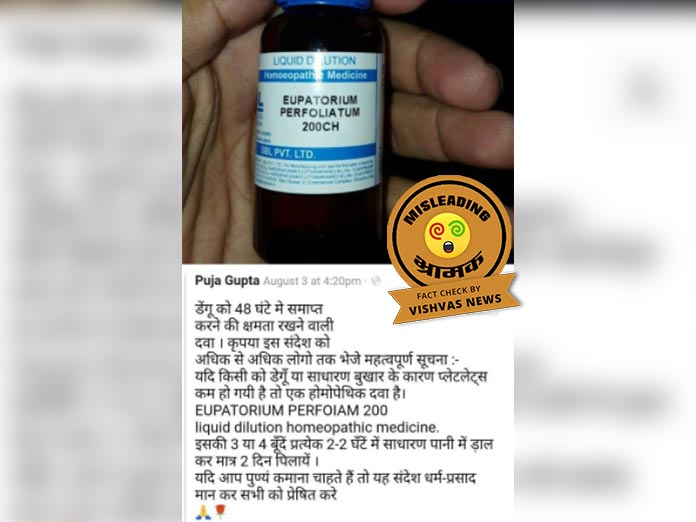 Vishvas News (New Delhi) A post is viral on social media with claims that a medicine named EUPATORIUM PERFOIAM 200 can cure dengue in 48 hours. As per the viral claim, EUPATORIUM PERFOIAM 200 is a homeopathic medicine and it’s  2, 3 drops diluted in water and consumed for two days, can cure dengue. Vishvas News found in its investigation that the viral post is misleading.

A Facebook post shared by a page named Health tips hindi (Archive) claims: A medicine named EUPATORIUM PERFORIAM 200 if diluted and consumed for 2 days, it can cure dengue. Dengue can be cured in 48 hours.

Vishvas News searched the viral claim by contacting Dr. Shalini Shakya of Ramanujam Homeopathic Center in Mehrauli, Delhi. She explained: “ The treatment of the disease depends on its severity. In such a small time, one can determine the nature of the dengue disease and its activity, but it cannot be said that it can cure the disease completely in 48 hours. The name of the medicine is mis-spelled on the viral post, it is actually Eupatorium Perfoliatum.”

The viral post was shared by a page named Health tips hindi. The page was created in 2019.

Conclusion: The post claiming that the medicine named EUPATORIUM PERFOIAM 200 can cure dengue in 48 hours is misleading.