Fact Check: This old Picture Of Nitish Kumar and Tejashwi Yadav Is Viral With Misleading Claim 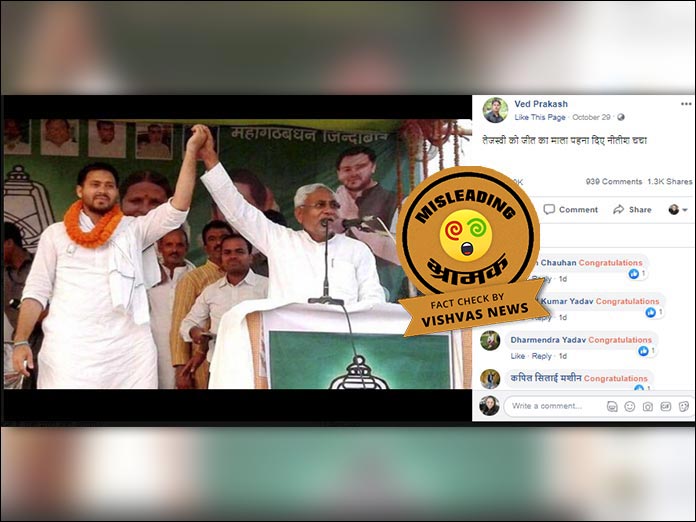 New Delhi (Vishvas News). Amid the ongoing elections in Bihar, a picture of Chief Minister Nitish Kumar and Rashtriya Janata Dal (RJD) leader Tejashwi Yadav is viral on social media with the claim that Nitish has given the victory garland to Tejashwi.

Vishwas News investigation revealed the viral claim is misleading and that this picture is old.

A viral of Bihar Chief Minister Nitish Kumar and RJD leader Tejashwi Yadav is shared with a claim that Nitish Chacha gave the garland of victory to Tejashwi.

We searched this photo on the Internet using Google reverse image tool. We found this viral picture in a news article published on 20 April 2016 by navbharattimes.indiatimes.com.

We also found this picture in an article published on 23 October 2017 by the indiatoday website. We could confirm that the picture was not captured recently.

Vishvas News contacted JDU spokesperson Rajiv Ranjan to verify the claim. “This picture is old and the viral claim is false,” said Ranjan.

Conclusion: The viral post is misleading. The picture of Nitish Kumar and Tejashwi Yadav is old.