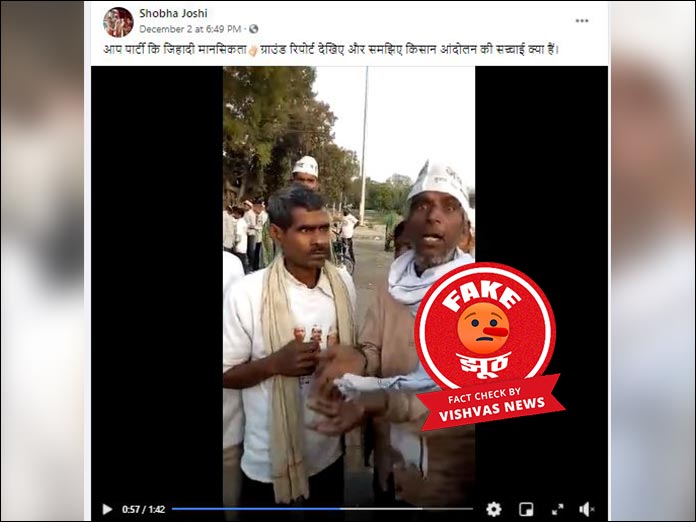 New Delhi (Vishvas News). A video alleging that Aam Aadmi Party (AAP) has paid money to daily wage workers to take part in the famers’ movement is viral on social media amid the farmers’ protest in New Delhi.

Vishvas News investigation revealed the video is old and is not from ongoing farmers’ movement.

A viral video on Facebook alleges that daily wage workers have come to participate in farmers’ movement for ransome. The user has expressing his disappointment with AAP in his post shared with the video.
The archived version of Facebook post can be seen here .

We could identify that nobody is wearing winter clothes or facemask in the video. The video informs about rally, but the ongoing farmers’ movement is not a rally.

We first uploaded the viral video to the InVID tool and extracted keyframes. We searched them on the Internet using Google reverse image search tool. We found this video in a tweet by Delhi BJP leader Kapil Mishra posted on 26 March 2018 clarifying as Kejriwal’s Haryana rally.

We also found this video on Aajtak and inkhabar.com with news reports confirming it as from AAP’s Hisar rally. However, AAP denied the charges of paying money for the participants.

We also found a tweet by AAP leader Aarti refuting these allegations.

Vishvas News contacted AAP leader Deepak Bajpai to verify the claim. “The viral video is old. These allegations are baseless. We have been denying such claims since then,” said Bajpai.

Social scanning of the FB user Shobha Joshi who shared the viral claim revealed that she lives in Almora, Uttarakhand.

Conclusion: The viral post is fake. The viral video is old and is not from ongoing farmers’ movement.