Fact Check: This old video of child and mother pulling stretcher in Deoria hospital viral as from Bihar 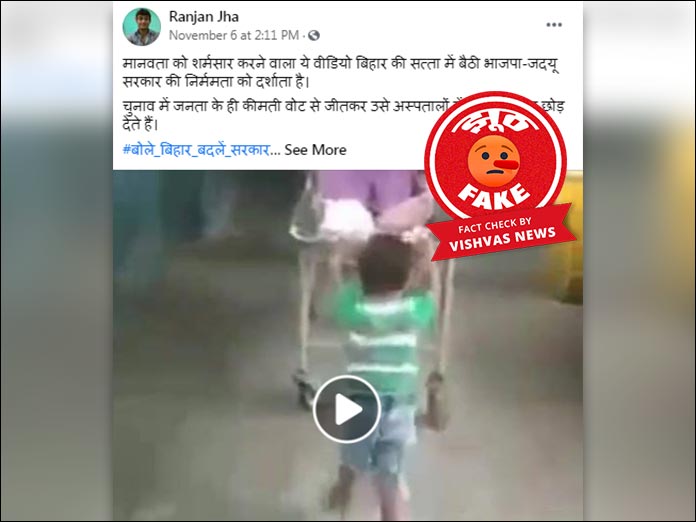 New Delhi (Vishvas News). A viral video of a boy pushing a stretcher in a hospital is shared with a claim that it is from Bihar.

Vishvas News investigation revealed the claim is fake. The old video of 6-year-old boy pushing the stretcher is from Deoria district of Uttar Pradesh.

Facebook user Ranjan Jha uploaded a video on 6 November writing, “This video shaming humanity shows the ruthlessness of the BJP-JDU government in power at Bihar. After winning the election with the precious votes of the public, they leave him to die in hospital.” The archived version of the Facebook post can be seen here.

We first uploaded the viral video to the InVID tool and extracted keyframes. We searched them on the Internet using Google reverse image search tool. We found the video on many news websites clarifying it as a video from Deoria, UP.

According to a news report by the Dainik Jagran website published on 20 July, this video from a district hospital in Deoria has created a panic in the health department. “The video shows an injured man on a stretcher and a woman pulling a stretcher with child’s assistance. The woman alleges that the midwife posted in the ward asked for bribe to pull the stretcher.

We also found this viral video on several YouTube channels. The India News has uploaded this video on their YouTube channel on 19 July with description that a mother and her child pulled the stretcher themselves in Deoria.

Vishvas News contacted Dainik Jagran’s Deoria district in-charge Mahendra Kumar Tripati to verify the claim. He told us that the viral video of the child pulling the stretcher with his mother is from a hospital in Deoria. He also informed that two staffs were transferred and the District Magistrate had formed a two-member team to investigation the matter.

Social scanning of the Facebook user Ranjan Jha who shared the viral claim revealed that he is from   Madhubani, Bihar and has more than 1,400 followers on Facebook.

Conclusion: The old video of a child and mother pulling stretcher in Deoria district hospital is viral with fake claim as from Bihar.