Fact Check: This old video of people asking To Vote For PM Modi At Tejashwi’s Rally is viral with Misleading Claim 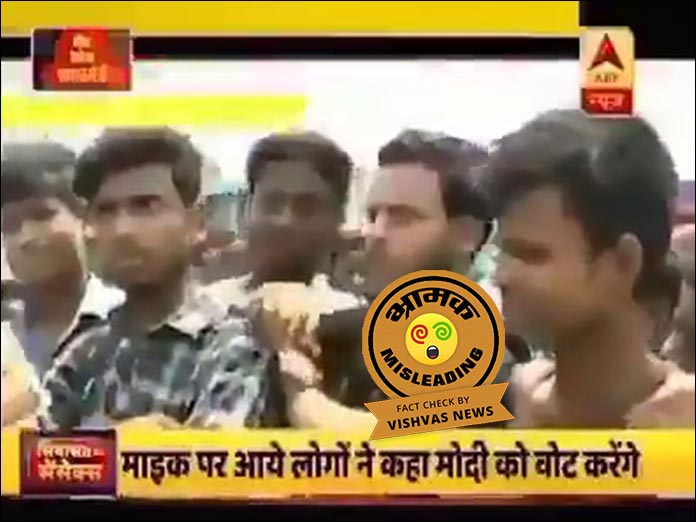 New Delhi (Vishvas News). A video of people asking to vote for the BJP is shared with a claim that it happened in RJD leader Tesjashwi Yadav’s rally in Bihar ahead of the Assembly elections.

We received this video for fact checking on Vishvas Fact Checking WhatsApp chatbot (+91 95992 99372). Vishvas News investigation revealed the claim is misleading. The video of 2019 Lok Sabha elections is viral as from assembly election campaigning in Bihar.

Twitter user posted a video of ABP News where people are asking to vote for the BJP. The post describes that it is a clipping from Tejashwi Yadav’s rally…but people will only vote for Modi. The archived version of the tweet can be seen here .

We could identify the ABP News logo on the viral video. We heard people asking to vote for PM Modi. The title card in the video: ‘The fastest results on May 23 only on ABP News’ clarified that the video was captured during the Lok Sabha election in which the results were to be declared on 23 May 2019.

Vishvas News identified Utkarsh, the reporter in the viral video and contacted him to verify the claim. Utkarsh is currently with Aaj Tak channel. He told that us that this video package was from the Lok Sabha elections last year. He clarified to us that he was then working with ABP News and has also alerted people who shared this video with wrong claim.

Conclusion: This video of people asking to vote for PM Modi in Tejashwi’s rally is during the 2019 Lok Sabha elections. It is not from current Bihar Assembly elections as in the claim.