Fact Check: This picture of man thrashed by Police in 2019 viral as from R-Day violence

The viral post is misleading. A picture of old incident of attack on auto driver in Mukherjee Nagar is now viral as from recent farmer’s tractor rally violence. 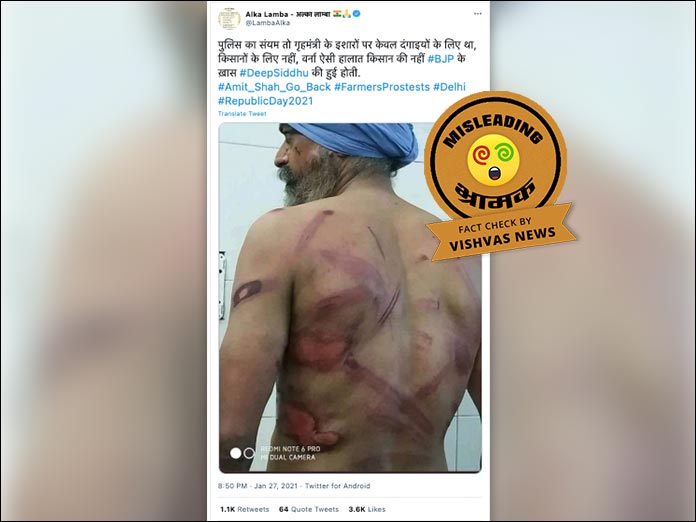 New Delhi (Vishvas News). After the farmer’s tractor rally violence in New Delhi, a picture of a man with wounds on his back is viral on social media with a claim that this unarmed food giver (farmer) was beaten up with stick by Police at the protest.

Vishvas News investigation revealed the claim is misleading. The picture of an old incident is now viral as from recent farmer’s tractor rally violence.

Facebook user Vickram Swami posted a picture of a man with red wounded marks on his back claiming unarmed food giver was beaten up with sticks. The archived version of the post can be seen here.

We also found this picture shared with similar claims on Twitter.

Violence broke out in the national capital on Republic Day during the farmers tractor rally. The Delhi Police on Wednesday filed several FIRs in connection with the incident. As many as 37 farmer leaders and activists, including BKU spokesperson Rakesh Tikait, Satnam Singh Pannu, Darshan Pal Singh, Medha Patkar and Yogendra Yadav, were held responsible for yesterday’s riots in one of the FIRs filed by the Delhi Police. The FIR cited violent acts such as not following mutually agreed route for the tractor rally and the timing of farmers’ march to disrupt the Republic Day parade, stated an article in the Timesnownews.

We searched on the Internet for news about farmer beaten up by the Police as stated in the viral claim. We did not find any authentic news reports confirming the incident.

Vishvas News contacted Rakesh Singh, Dainik Jagran’s Crime Reporter, Delhi for verification. Quoting ACP Anil Mittal, Additional Public Relations Officer of Delhi Police saying, “This photo is viral on social media recently. Delhi Police has not beaten anyone like this during the tractor rally violence. Efforts are being made to control the spread of this rumour,” Singh refuted the claims.

We searched for the source of the image using Google reverse image search tool. We found this in a tweet posted on 17 June 2019 writing, “A Sikh auto driver and his son were brutally beaten outside Mukherjee Nagar police station…”

We also found many news articles clarifying the incident of police brutality that happened in Mukherjee Nagar in 2019.

Social scanning of the user who shared the viral claim that he lives in Bikaner and has 2,062 followers on Facebook.

Conclusion: The viral post is misleading. A picture of old incident of attack on auto driver in Mukherjee Nagar is now viral as from recent farmer’s tractor rally violence.