Fact Check: This picture of policemen cleaning blood from the road is from 2013 Kashmir; not related to the lathi charge in Karnal

The claim turned out to be false in the investigation of Vishvas News. This picture is from 2013, Kashmir. This picture has nothing to do with the lathi charge on farmers in Karnal. 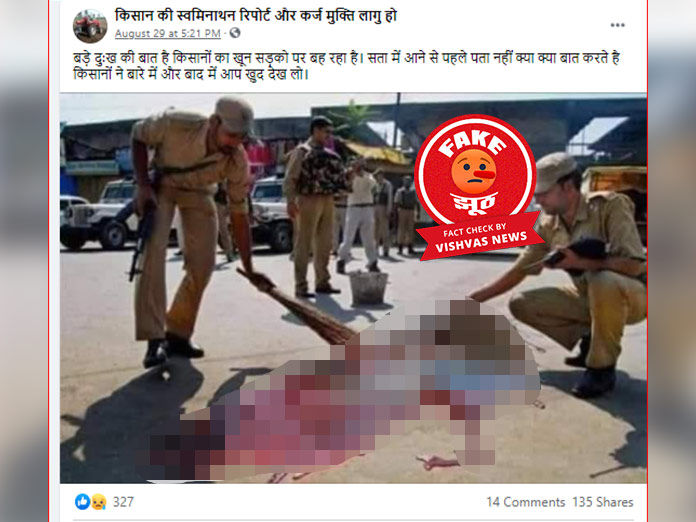 New Delhi (Vishvas News): A picture is viral on social media, where some policemen can be seen washing away the blood spilled on a road. It is being claimed with the post that this picture is related to the lathi-charge on farmers in Karnal on Saturday (Aug 28). The claim turned out to be false in the investigation of Vishvas News. This picture is from 2013, Kashmir.

Sharing this picture on Facebook, a page named ‘Kisan Ki Swaminathan Report Aur Karj Mukti Laagu Ho’ wrote, “Translated: It is a matter of great sadness that the blood of farmers is flowing on the roads. I don’t know what is the matter. Let’s talk about the farmers and see for yourself later.

To check the post, we searched this image on Google reverse image. We found this picture published on 23-Sep-2013 at indianexpress.com. The picture read “CISF jawans martyred in a terrorist attack in Srinagar”

The same image was also found from another angle at alamy.com. According to the description “Indian policemen wash a bloodied road in the Iqbal Park area of ​​Srinagar, the summer capital of Kashmir where two CISF jawans were shot dead on 23/9/2013.”

We spoke to Naveen Nawaz, Bureau Chief of Jagran Srinagar in this regard. He confirmed that this picture is from 23/9/2013 Kashmir when terrorists shot dead two CISF jawans in Iqbal Park area of ​​Srinagar.

Haryana Police on Saturday (August 28) lathi-charged the protesting farmers in the Bastar toll plaza area of ​​Karnal, disrupting the traffic on the highway and injuring at least 10 people. Farmers attacked some farmers. They were protesting the lathi charge while they allegedly tried to stop the convoy of state BJP chief OP Dhankhar.

This post has been shared by a Facebook page named ‘Kisan Ki Swaminathan Report and Karj Mukti Laagu Ho’. We scanned the page and found that the page has 33,791 followers.

Conclusion: The claim turned out to be false in the investigation of Vishvas News. This picture is from 2013, Kashmir. This picture has nothing to do with the lathi charge on farmers in Karnal.