Fact Check: This Picture Of Priyanka And Rahul Gandhi Is From 2019, viral claim is fake 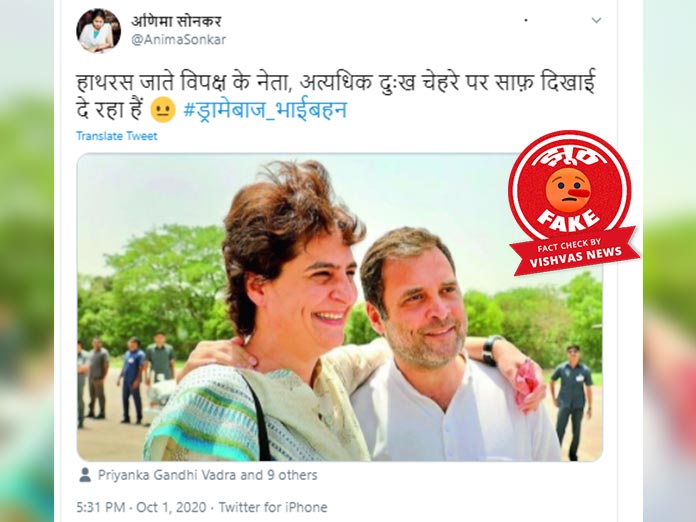 New Delhi (Vishvas News). After the Hathras incident in in UP, a smiling picture of Congress leader Rahul Gandhi and his sister Priyanka Gandhi is viral on social media with a claim that this picture was captured during their visit to Hathras victim’s family.

Vishvas News investigation revealed the claim is fake. The picture in the viral post was captured at Kanpur Airport in 2019.

In the viral picture, Priyanka Gandhi and Rahul Gandhi can be seen with a smiling face. It is shared with a claim that it was during his visit to Hathras victim’s family. The archive link to this post can be seen here .

We searched this photo on the Internet using Google reverse image search tool. We found the viral picture in news published by the NDTV on April 27, 2019. According to the news, this picture is from Kanpur airport.

We also got glimpses of the viral picture in a video uploaded on Times of India YouTube channel on 27 April 2020.

We contacted Congress Media In-charge Pranab Jha to verify the claim.  “This picture was taken during 2019 Lok Sabha elections. Both of them were about to board a helicopter and Rahul Gandhi was joking by asking Priyanka Gandhi to get a big helicopter,” said Jha.  Congress spokesperson Sanjeev Singh also confirmed the picture is old.

Twitter user Anima Sonkar @AnimaSonkar is one among the many users who had shared the viral post. Social scanning of the user revealed that she has 19.7K followers on twitter.

Conclusion: The viral claim is fake. This photo is not from any recent event. The viral photos were captured in 2019.