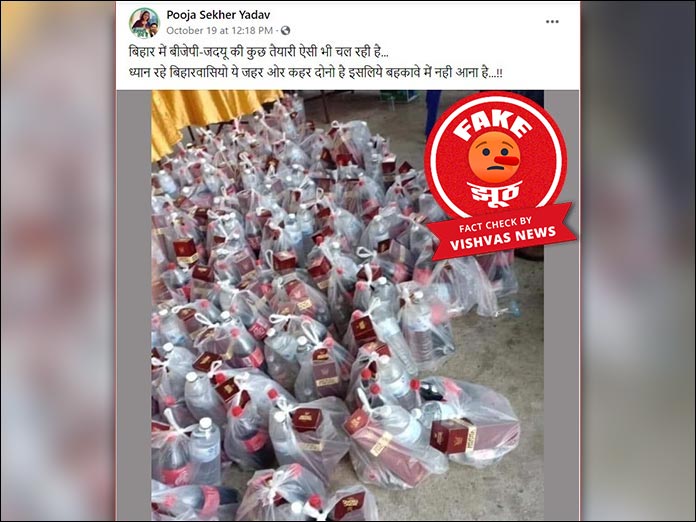 Hyderabad (Vishvas news). Ahead of the Assembly elections in Dubbaka, Telangana, a viral photo of liquor packages is shared with claim that the bottles are distributed to voters for free.

Vishvas News investigation revealed the viral post is fake. The picture of liquor bottles in the relief packages for flood victims in Thailand is viral with fake claim.

Twitter user Prawin Gopani @ Prawingopani246 uploaded a photo of liquor packages on October 28 writing, ” Vaccination to be given for free in Telangana is ready in Dubbaka.”

Many other users have shared the viral image with similar claims.

We searched this photo on the Internet using Google reverse image tool. We found this viral picture on a blog written in Thai language clarifying that alcohol was distributed to 2019 flood victims in Ubon Ratchathani, Thailand along with other relief packages.

We found the same picture on thaihitz.com. describing it as relief packages for flood victims.

We could confirm that the picture is not related to Dubbaka elections.

Vishvas News contacted Hans India Medak District Correspondent Venkatolla Shiva Gowda to verify the claim. He clarified that the viral photo has nothing to do with Dubbaka, Telangana and the viral claim is fake.

Social scanning of the user who shared the viral post revealed that he is. a native of Hyderabad and has 21 followers on Twitter. His profile is active since September 2017.

Conclusion: The viral post is fake. The picture of relief packages with liquor bottles for flood victims in Thailand is viral with fake claim.