Fact Check: This picture of RSS members with the Queen of Britain is edited

The viral post proved to be fake in the investigation of Vishvas News. Actually, this picture is edited. This picture has been made by combining two different pictures. 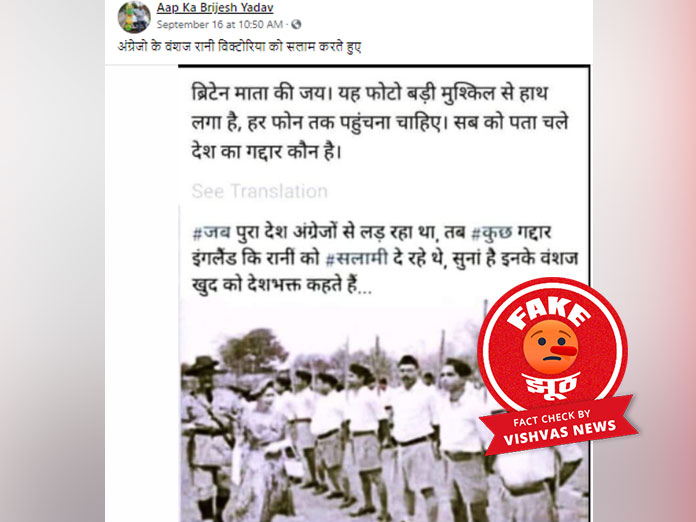 New Delhi (Vishvas News): In a picture viral on social media, some youths, wearing RSS uniform, can be seen standing in front of Queen of Britain. It is being claimed with the post that these RSS swayamsevaks saluted the Queen of Britain. The claim turned out to be false in the investigation of Vishvas News. Actually, this picture is edited.

Uploading this picture, Facebook user Aap Ka Brijesh Yadav wrote “Translated: Britain Mata ki Jai. This photo is hard to find, should reach every phone. Let everyone know who is the traitor of the country. # When the whole country was fighting with the British, some traitors were saluting the Queen of England. I have heard that their descendants call themselves patriots.

Vishvas News took the help of Google reverse image tool to check the veracity of the viral picture. We found this picture of RSS swayamsevaks in a news article published on nagpurtoday.in in 2013. No one was standing in front of these swayamsevaks in this picture uploaded here.

We also found this picture on decanchronicle.com. Even in the picture here, the Queen of Britain was not in front of these volunteers.

Now, with the help of the Snipping Tool, we did a Google reverse image search of the portion containing the picture of Queen of Britain. We found this photo at thenational.scot/news. In this photo, some Nigerian soldiers were standing in front of Queen Elizabeth II of Britain. The image was accompanied by a caption that read: “Queen Elizabeth II inspects men from the newly-named Queen’s Own Nigeria Regiment, Royal West African Frontier Force, at Kaduna Airport, Nigeria, during her Commonwealth tour on February 2, 1956.”

Vishvas News contacted RSS leader Rajiv Tuli in this regard. He said, “This picture is edited. Such campaigns have been going on for a long time against Sangh. But due to all this, the credibility of the opponents is decreasing and the work of the Sangh is increasing continuously.”

After this, we checked the profile of the user Aap Ka Brijesh Yadav, who made the fake post. We came to know that Facebook user is a resident of Buxar and is followed by 4,015 people on Facebook.

Conclusion: The viral post proved to be fake in the investigation of Vishvas News. Actually, this picture is edited. This picture has been made by combining two different pictures.