Fact Check: This picture of the injured person has nothing to do with the lathi charge on farmers in Karnal; the viral claim is false

The claim turned out to be false in the investigation of Vishvas News. This picture is of a Gau Rakshak from Gurgaon who was injured on August 25 while fighting with cow smugglers. This picture has nothing to do with the lathi charge on farmers in Karnal. 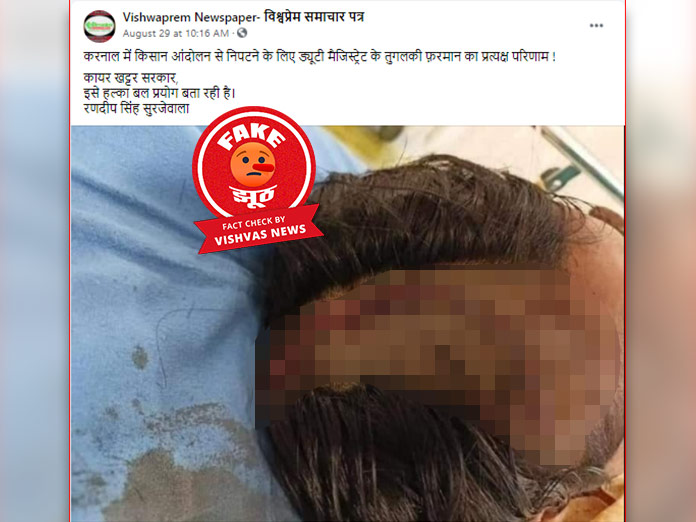 New Delhi (Vishvas News): A picture of an injured man is going viral on social media. The person seen in the picture has suffered a severe head injury, which has received many stitches. It is being claimed with the post that this person was injured in the baton charge on farmers in Karnal on Saturday. The claim turned out to be false in the investigation of Vishvas News. The picture is of a Gau Rakshak from Gurgaon who was injured on August 25, allegedly while fighting with cow smugglers.

This post was also tweeted by Congress spokesperson Randeep Singh Surjewala with the same description. Although this tweet has now been deleted, but many people are sharing the screenshot of this tweet.

We first checked the Twitter handle of Randeep Surjewala. This tweet was not on his handle. But on checking his Twitter archive, we found that he had posted this tweet on August 28, which was later deleted. The archived link can be seen here.

We searched this image on Google reverse image and found that this image was first shared on 26 August by a Facebook page named Gauputr Bamlehari. The post read, “Translated: Bajrang Dal’s lion brothers saved the cow-mother from going to slaughterhouse by risking their lives and facing the firing of cow-smugglers, salute to such brave hard-core cow-son warriors…. Team Monu Manesar”

According to a news published in tribuneindia.com ” A local ‘gau rakshak’ hurt during a clash with cow smugglers moved the cyber-crime cell of the police against the alleged misuse of his pictures on the social media as that of an injured farmer. The picture, as per him, was shared by a local leader and allegedly retweeted by many senior Congress leaders. As per the complaint filed by Tinku of Kadarpur village, on Sunday, his colleague Monu Manesar, alias Mohit Yadav, told him that his picture showing injuries went viral on the social media. Tinku was hurt in a clash with cow smugglers on August 26 and he got around 80 stitches on his head.”

We contacted Dainik Jagran’s Haryana digital in-charge Sunil Jha for more information on this. He told us that “the viral picture is of a ‘cow protector’ Tinku. The incident is of 25 August when this man named Tinku was injured while allegedly fighting with cow smugglers.”

The Haryana Police on Saturday (Aug 28) lathi-charged the protesting farmers at the Bastara Toll-Plaza area in Karnal disrupting traffic movement on the highway and injuring at least 10 people. The farmers were protesting against a baton charge at some farmers while they reportedly tried to stop state BJP chief OP Dhankar’s convoy.

Conclusion: The claim turned out to be false in the investigation of Vishvas News. This picture is of a Gau Rakshak from Gurgaon who was injured on August 25 while fighting with cow smugglers. This picture has nothing to do with the lathi charge on farmers in Karnal.