Fact Check: This picture of woman standing with baton in her hand is not from ongoing farmers’ protest

The viral post is fake. This picture is available on the Internet since 2016 with different claims. 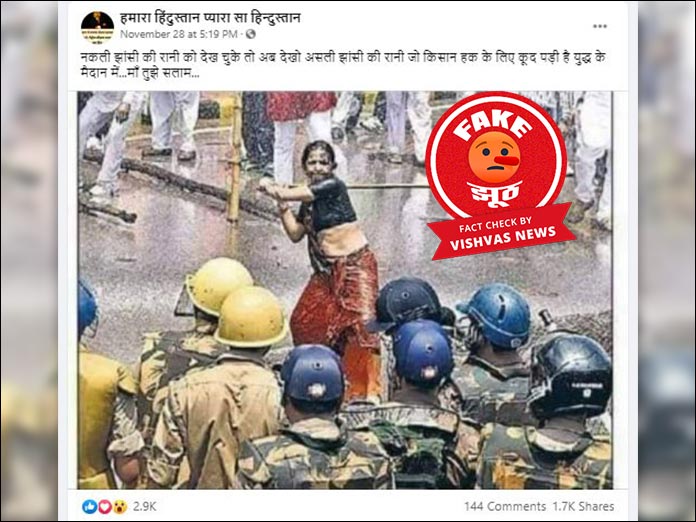 New Delhi (Vishvas News). Amid the farmers protest in Delhi, a photo of a woman standing in front of police in a rage with baton in her hand is shared as from recent protest.

Vishvas News found in its investigation the claim is fake. This viral picture is on the Internet since 2016 shared with viral claims.

Facebook page Hamara Hindustan Pyara Sa Hindustan posted a picture of woman standing with a baton in her hand in front of police with a claim that she is participating in farmers’ protest.

We searched this picture on the Internet using Google reverse image tool and found this picture posted on 10 September 2016 on Facebook page Hyderabad Funny Club without any description.

We also found this picture in a tweet by Tiju Thankachan @TijuThankacham posted on 4 October 2018 with description as from farmers protest.

Vishvas News contacted Tiju Thankachan to verify the claim.  “I don’t remember, but I found this picture on WhatsApp and shared it on Twitter. I did not take this picture. But I can definitely say that this picture is old and not from any of the recent protest,” said Thankachan.

We cannot independently identify the source of this picture due to lack of information, but we could confirm this picture is not from the ongoing farmers’ protest.

Social scanning of the facebook page that shared the viral claim revealed that it has 62,223 followers.

Conclusion: The viral post is fake. This picture is available on the Internet since 2016 with different claims.