Fact Check: This screenshot viral in the name of UP elections is fake 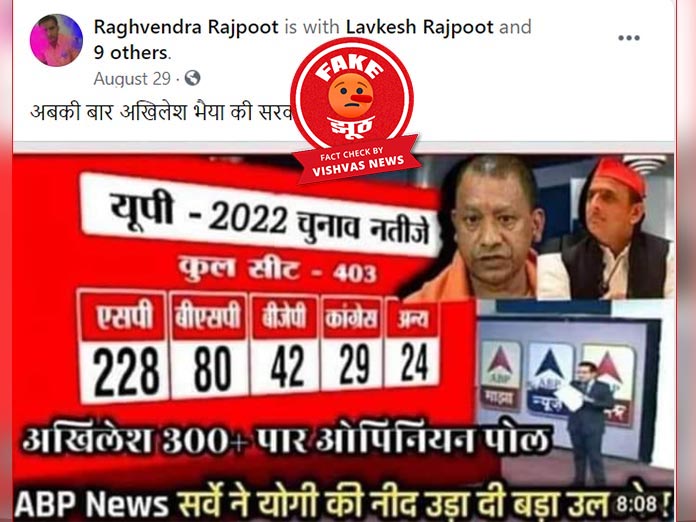 New Delhi (Vishvas News): A fake post is going viral on social media. In this, the old opinion poll of a channel is edited and is made viral as an opinion poll of UP 2022 elections. Vishvas News investigated and found the viral post to be fake. This was also confirmed by the senior editor of ABP.

It is written in the picture that according to the ABP news survey, SP is getting 228 seats in the 2022 UP elections. Whereas it was further written that Akhilesh 300+ Opinion Poll.

Vishvas News searched YouTube with related keywords and found viral screenshot-like content in the video uploaded on the YouTube channel of ABP News stating it to be the UP 2012 election results. It was further informed that in the 2012 elections, the SP had got 228 seats. Apart from this, it also showed about the seats won by the other party. You can watch this full video below.

Vishvas News scanned the social media accounts of ABP. We found a tweet dated October 8, 2021, on the Twitter handle of ABP News. It was written in it that according to the survey, the BJP government is being formed again in UP, benefit to SP too.

Vishvas News spoke to the senior editor of the editorial department of ABP News regarding the viral post. He said that the viral post is completely fake.