The viral post is misleading. The pictures and figures from the 2016 survey is now viral. Puthiyathalaimurai has not yet conducted any survey this year. 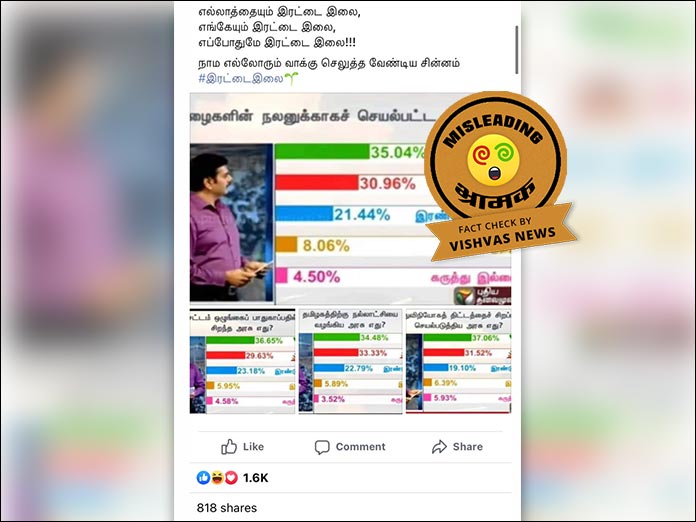 New Delhi (Vishvas News). A post is viral on Facebook with pictures of a survey on Tamil language regional news channel, Puthiyathalaimurai. The post shows survey comparing DMK and AIADMK’s performance over a period of time.

Vishvas News investigation revealed the claim is misleading. Puthiyathalaimurai web team chief clarified to us that the viral post is old and they have not conducted any survey this year.

Rating the performance of the leading parties in Tamil Nadu in terms of percentage under various categories, the viral post draws a comparison between the DMK and AIADMK. While all the parameters like good leadership, supporting the poor, safeguarding law and order, efficiency of public distribution system and keeping up election manifesto promises, the AIADMK party has shown to have winning trend than the DMK.

We searched on the Internet for Puthiyathalaimurai’s poll survey. While we could not see any recent uploads, we found a video on their YouTube channel published on 15 February 2016.

We could clearly observe the snapshots in the viral post matches with the content in the video, confirming to us the survey is quite old.

Vishvas News contacted Puthiyathalaimurai web team Chief Manoj Prabhakar for verification. “We have not conducted any survey this year. The pictures are from 2016 survey,” he said.

Tamil Nadu Assembly Elections 2021 will be held in a single phase on 6 April and the results will be declared on May 2, states an article in the Dainik Jagran.

Social scanning of the public figure who shared the viral post on his page revealed that he is a politician with 11,885 followers on Facebook.

Conclusion: The viral post is misleading. The pictures and figures from the 2016 survey is now viral. Puthiyathalaimurai has not yet conducted any survey this year.