Fact Check: This train is not owned by Adani, video of branded locomotive is viral with fake claim 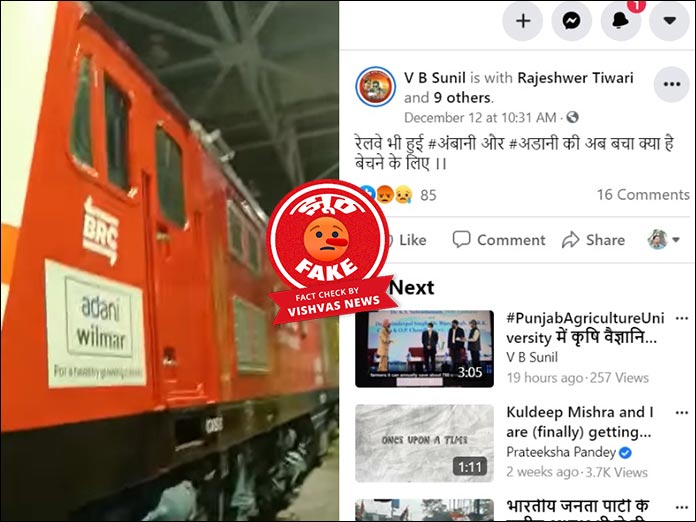 New Delhi (Vishvas News). A video allegedly of a train, advertising Adani group is shared with a claim that Indian Railways has been privatised and is owned by the businessman Gautam Adani.  The exterior of the train engine advertises logo named Adani Wilmar and Fortune Chakki Fresh flour. Several social media users have shared this video with similar claims.

A viral video allegedly of a train with exterior displays advertising Adani Wilmar and Fortune Chakki Fresh Flour is shared with a claim that it has been sold to Adani. Facebook User VB Sunil is one among the several users who had shared this video and expressed his disagreement.

Vishvas News contacted Anil Saxena, Public Relations Officer of the Indian Railways to verify the claim. Sharing to us a news article by the Financial Express, he clarified that it is just a branded Indian Railway locomotive.

According to the Railways, branding has been introduced on the rail engines for the last few years to increase the income of the Indian Railways. Advertisements for other brands like Amul can also be seen in the train.

We also found another news article stating that the Railways is looking towards Adani and Haldiram to increase their earnings. In Vadodara, Adani Wilmar has been allotted for locomotive branding.

We observed that the viral video identifies Vadodara and Adani-Wilmar, written at the top corner of the engine.

He explained to us that any private company could advertise its products on contract. “This is not the first time. This has been happening already. It would be absolutely wrong to say that the railway has been sold to Adani,” said Meena.

Adani-Wilmar is a joint venture between Adani Group of India and Wilmar International of Singapore created in 1999.

Social scanning of the user who shared the video revealed that he has 3,575 friends and 1,643 followers on Facebook. He is a resident of Bhilai, Chhattisgarh.

Conclusion: The viral claim is fake. The locomotive displaying Adani’s product is shared with false claim that Railways has sold the train to Adani. Railways generate revenue from private companies through locomotive branding.