Fact Check: This tweet about BJP’s Alliance with Owaisi’s Party In West Bengal is fake﻿ 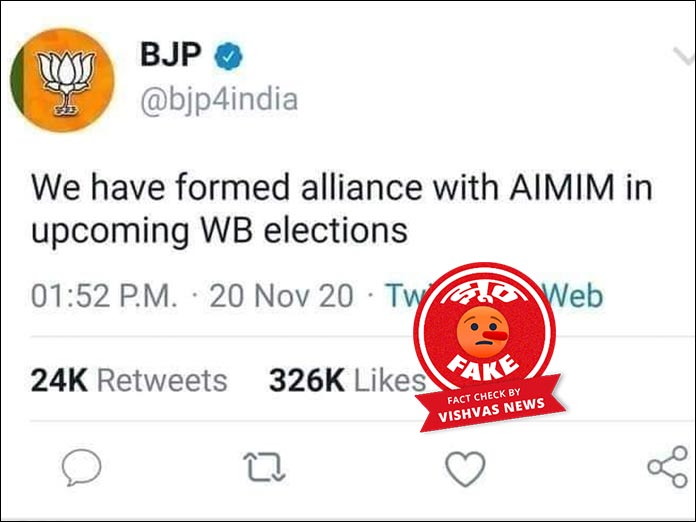 New Delhi (Vishvas News). A picture of a tweet allegedly from the BJP’s verified twitter profile announcing their alliance with AIMIM for the upcoming West Bengal elections is viral on social media.

Vishvas News investigation revealed the viral claim is fake. BJP has not posted any such tweet.

Facebook user Anil Sharma posted a picture of a tweet on 21 November writing, “To win you have to go to any extent, you will fight them first, then fight them among themselves, no one will pay attention to employment.” The tweet allegedly from the BJP’s verified twitter profile announces the party’s alliance with AIMIM in upcoming WB elections.

Vishvas News started searching the news on the Internet using keywords like ‘Owaisi and BJP alliance’. We did not find any news reports of Asaduddin Owaisi’s party AIMIM having alliance with the BJP. However we found news articles that stated about Owaisi’s offer to contest the election with Mamata Banerjee.

An article published by the Jagran.com on 19 November, reported that Owaisi, while offering a pre-poll alliance with Mamata, said that his party would help the Trinamool Congress in defeating the BJP in the upcoming assembly elections.

We scanned the official Twitter handle BJP4India to verify the picture. We did not find any such tweet as in the viral picture. But we found a tweet posted on November 20, in which BJP President JP Nadda is describing Owaisi’s party as a social breaker.

Vishvas News contacted BJP spokesperson Tajinder Pal Singh Bagga to verify the claim. He said that there is no truth in the viral tweet.

Social scanning of the user who shared the viral picture revealed that he is a resident of New Delhi.