Fact Check: This video is not from Bihar election campaign, viral claim is fake 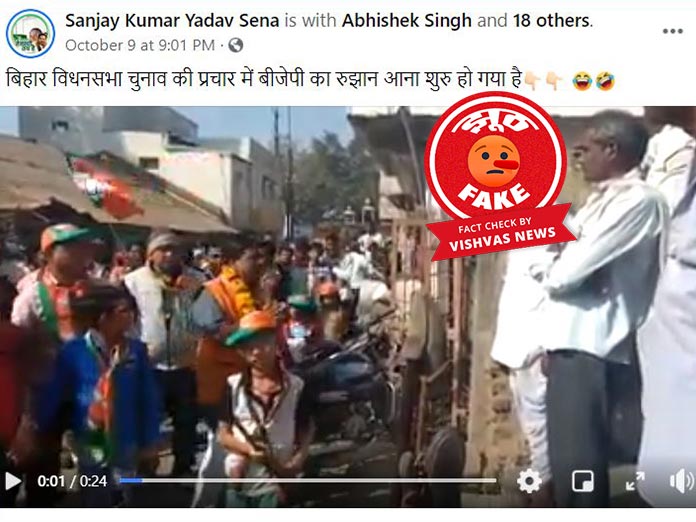 New Delhi (Vishvas News). A viral video is shared with a claim that an elderly man is offering a garland of slippers to a BJP leader in Bihar.

Vishvas News investigation revealed the viral post is fake. The video is of an old incident in Madhya Pradesh.

We uploaded the viral video to the InVID tool and extracted keyframes. We searched them on the Internet using Google reverse image search tool. We found this video uploaded by the News18 website on 8 January 2018. The article stated that an elderly man offered a garland of slippers to BJP candidate Dinesh Sharma, contesting for the assembly election in Dhar, Madhya Pradesh.

We also found a news report on Naidunia website published on 8 January 2018. It was reported that an elderly man garlanded BJP Presidential candidate Dinesh Sharma with slippers in Dhamnod, Dhar.

Vishvas News contacted Prem Vijay Patil, Naidunia chief of Dhar in Madhya Pradesh.  “This video is about the local body elections in Dhamnod region of Dhar district. The BJP candidate was given a garland made of slippers. The video has nothing to do with upcoming Bihar elections,” said Patil.

Social scanning of the user who shared the viral post revealed that he hails Patna, Bihar.

Conclusion: The viral post is fake. The old video of an incident in Madhya Pradesh is viral as from Bihar.