Fact Check: This video is not from Uttar Pradesh, viral claim is fake 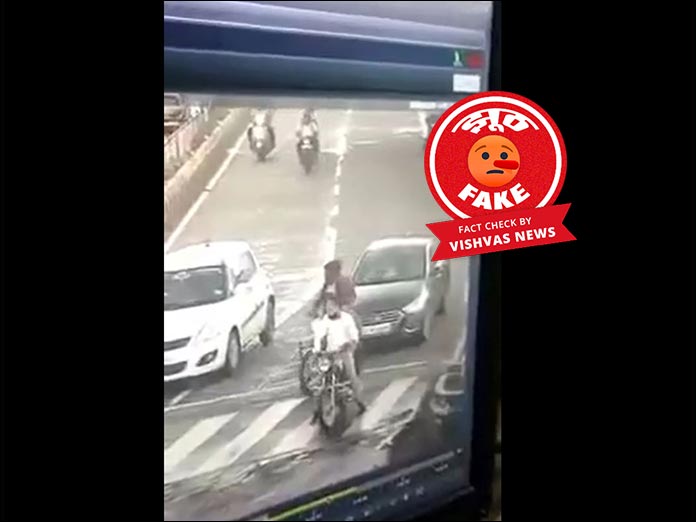 New Delhi (Vishvas News). A viral video features a standing car in a signal whose driver is suddenly attacked by few men in broad daylight.  The video is shared with a claim that people associated with RSS and BJP brutally attacked an IAS officer from Scheduled Caste in Uttar Pradesh and raped his daughter.

Vishvas News investigation revealed the viral claim is fake. We came to know that the viral post is false. The CCTV footage is of the murder of gambling kingpin in Nagpur.

Facebook user Madhu D Urakanakan uploaded a CCTV footage on September 30, writing, “It is alleged that ruling Upper Caste Nazi RSS-BJP goondas chopped to death a Scheduled Caste IAS officer in UP and raped his 16 year old daughter in the car, just because he neglects directions of RSS BJP not to distribute govt.’s alms to poor scheduled caste people…?”

Vishvas News uploaded the viral video to the InVID tool to extract keyframes. We searched them on the Internet using Google reverse image search tool. We found this video on many YouTube channels. We accessed this video on NEWJ YouTube channel posted on September 28 with description, “Gambling kingpin Balya Binekar aka Kishor Binekar stabbed to death in Nagpur… The accused firstly gathered and surrounded Balya’s car, got him out and stabbed him with hammer and other sharp weapons. The attack was covered on the nearby CCTV. Three out of five accused murderers arrested.”

We searched for the news using keywords. We got the news on The Live Nagpur website published news on 26 September that reported on Gambling Kingpin Binekar’s murder.

We also found a tweet from the ANI that states, “Nagpur Crime Branch has arrested four accused on the charge of murder.”

We contacted Saurabh Joshi, the Bureau Chief of ANI, Nagpur. He confirmed that the viral video is of an incident from Nagpur. “Nagpur Crime Branch has arrested some people for the murder of Kishore Binekar,” said Joshi.

Social scanning of the facebook user who shared the viral video revealed the he has 1,277 followers on Facebook.