Fact Check: This video is of German army, not Indian army 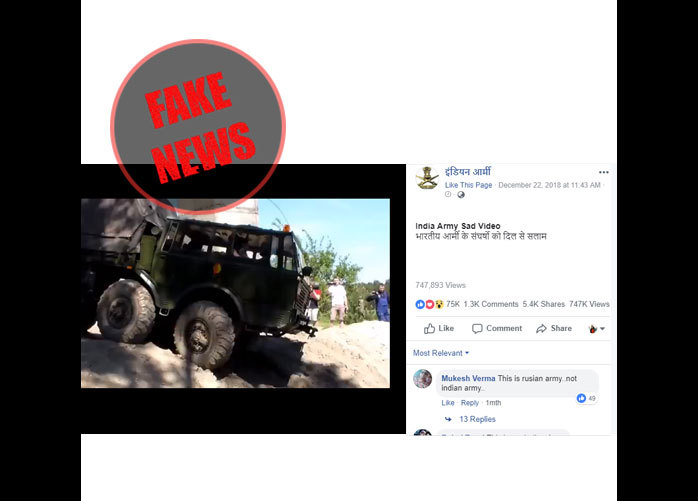 New Delhi (Team Vishvas)। A video post was shared on Facebook by a Facebook page Indian Army, in which an army truck can be seen stuck in loose mud. The video shows an Army truck driver struggling in mud and finally manages to come out of it.  The text accompanying the video reads, “India Army Sad Video .. The struggles of Indian Army”. In our fact check, we found that this video belongs to the German Army, not the Indian Army.

Upon seeing this video, Team Vishvas found that the sound in the background was not Hindi or any other Indian language. We put this video on Invid and Yandex and searched the thumb images. We found this video on the first page itself in search.

This video was originally uploaded on Youtube on May 5, 2016.

Upon analyzing this video on Youtube Data Viewer, we found out that this video was originally uploaded on YouTube by ‘Klaus Schröder Militär- und Landtechnik. The video’s subject was “Tatra 813 sunk in the mud, Peckfitz 2016(Translated). ′ and description was “Tatra 813 sunk in the mud hole, mountain test with MAN and Ural, salvaged by SPz BMP on Father’s Day in Peckfitz, 5 May 2016. Driver offers some action visuals to the visitors”(Translated).

By this description, it is clear that the video was shot in Peckfitz, Germany on May 5, 2016.

Conclusion: In fact Check, we found that the post shared by Facebook page Indian Army is false. The video is from Germany and not from India.