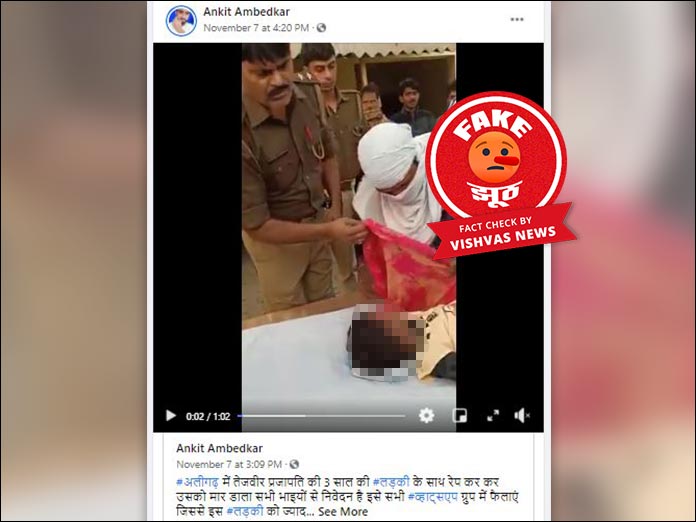 New Delhi (Vishvas News). A video of deceased child is viral on social media with a claim that she was raped and murdered in Aligarh.

Vishvas News investigation revealed the claim is fake. The girl died in a road accident. The claim about rape and murder is fake.

We first uploaded the viral video to the InVID tool and extracted keyframes. We searched them on the Internet using Google reverse image search tool. We found a tweet posted by the Aligarh Police, clarifying that the three-year-old girl in the video had died due to an accident. The tweet states, “Please do not confuse without knowing the truth… The girl died due to injuries suffered in a road accident…case is registered in the Akrabad police station.” The tweet clarifies that there was no rape as claimed in the viral post.

Aligarh Police had also posted a tweet on 8 November, in which SP Crime can be seen in a video saying, “Viral post on social media about the death of a 3-year-old girl in a road accident under Akarabad police jurisdiction is misleading / unfounded / is factless.”

Apart from this, we also found a video statement by the deceased girl’s mother in a tweet from Aligarh Police. She can be heard saying that her daughter died due to an accident.

Vishvas News contacted Aligarh SP Crime Arvind Kumar for further confirmation.  “An explanation has already been issued in this regard. The girl died in a road accident. The claim of rape is completely false,” said Kumar.

Conclusion: The viral post is fake. The girl in the video is an accident victim.