Fact Check: This Video of Mamata Banerjee Has No Relation With Amit Shah’s Bengal Tour 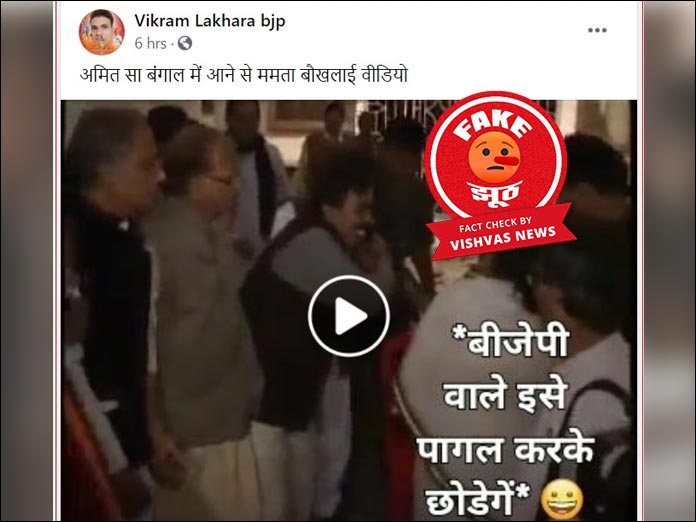 Vishvas News investigated the viral video and found that this video of Mamata Banerjee is viral on social media for quite a long time. It has nothing to do with Amit Shah’s visit to Bengal. The viral post is fake.

Facebook user Vikram Lakhra posted an old video of Mamata Banerjee with a claim that read (translated in English): “Mamata has gone mad due to Amit Shah’s Bengal tour.”

A user named Rupesh Tiwari has claimed that: “the stampede of leaders in the Trinamool Congress, Bengal rocked Mamata didi’s mental balance, watch this video.”

Vishvas News investigated the video by uploading it to the InVID tool and extracted its screengrabs. After this, we performed a Google reverse image search of the screengrabs we obtained. During the search, we found a video uploaded seven years ago on a YouTube channel. The video stated that TMC workers created trouble in the assembly. Some users in the comment called it a 2006 incident. The video can be seen here.

Vishvas News contacted Bengal Bureau Chief JK Vajpayee of Dainik Jagran and enquired about the viral video of Mamata Banerjee. He told that the viral post is fake and is an old video.

Vishvas News does not independently confirm when was the original video recorded or exactly how old it is, but it is confirmed that this video is old. It has nothing to do with Amit Shah’s current Bengal tour.

We scanned the profile of Facebook user Vikram Lakhara who shared the viral video. We found that the user has an inclination to a political party. More than 800 people follow the user.

Conclusion: The viral video of Mamata Banerjee is old and not related to Amit Shah’s recent Bengal visit. The viral post is fake.