Fact Check: This Video Of Road Accident Is Not Of Cheruvu Bridge In Hyderabad 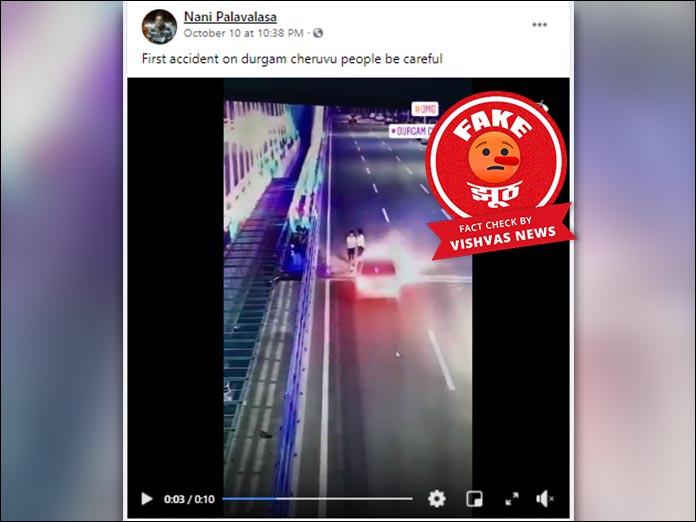 New Delhi (Vishvas Team). A viral video shows a girl being hit and thrown by a speeding car.  It is shared with a claim that this incident happened in Cheruvu flyover, Hyderabad.

Vishvas News investigation revealed the claim is fake. This video is not of an incident from Cheruvu Bridye in Hyderabad. The video is at least three years old.

A viral video shows a speeding car hitting a woman pedestrian.  The caption accompanying the video reads, “First accident on Durgam Cheruvu…” The archived version of this post can be seen here .

The Durgam Cheruvu Bridge in Hyderabad was inaugurated on 25 September. The bridge, touted as one of its kind in the country, has been constructed as part of the Telangana government’s flagship Strategic Road Development Plan (SRDP).

We uploaded the viral video to the InVID tool to extract keyframes and searched them on the Internet using Google reverse image search tool. We found this video on YouTube , uploaded on 16 September 2017. However, it has no mention about location of the accident.

We also found a website that has published this video on 13 September 2017. The video description written in Vietnamese language reads, “The young girl was busy listening to the phone, walking down the road, was hit by a car, the girl next to her was also engrossed in using the phone so she did not know her friend was in an accident.”  We could not find any information about the location of the incident even in this website.

The vtc.vn.  website has also published this video in 2017 describing it as from China. However, we could not independently confirm the location of this road accident video. But the video is at least three years old and not recent.

A tweet by the Telangana State Police on October 10, 2020, states that the viral video is not from Cheruvu Cable Bridge in Hyderabad.

We spoke to Amulya Bhaskar, Additional Traffic DSP, Hyderabad for verifying the viral claim.  “This incident is not from Cheruvu Cable Bridge. The viral post is fake,” said Bhaskar.

Conclusion: The viral claim is fake. This video is not from Cheruvu Cable Bridge in Hyderabad. An old video is now viral with fake claims.