Fact Check: This video of woman being abducted is not from Uttar Pradesh, viral claim is fake﻿ 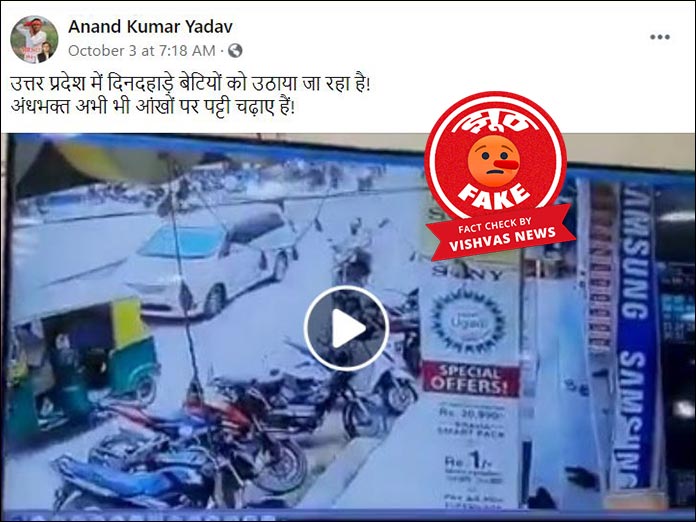 New Delhi (Vishvas News). A viral video shows two women walking on a road, when a man stepping out of a car pulls in one of them inside. The car speeds away while the other tried to rescue. This video is shared with a claim that women are abducted in broad daylight in Uttar Pradesh.

Vishvas News investigation revealed the claim is fake.  The CCTV footage of an incident in Kolar district of Karnataka is viral as from Uttar Pradesh.

The archived version of viral post can be seen here.

Vishvas News first uploaded the viral video to the InVID tool and extracted keyframes. We searched on the Internet using Google reverse image search tool. We found an article published by The News Minute on 14 August stated, a young woman walking along the road in Kolar, Karnataka, was kidnapped in front of her friend at around 11:30 am.

The Asianet News website had also published this video describing it as an incident in Kolar, Karnataka.

Vishvas News contacted Kolar Superintendent of Police Karthik Reddy. He said that the viral video is of an incident in Kolar. “This happened in August. All the accused in this case have been arrested,” said Reddy.

Social scanning of the user who shared the claim revealed that he lives in Mirzapur, UP.

Conclusion: The viral claim is fake. A kidnapping incident from Kolar, Karnataka, is now viral as saying from Uttar Pradesh.