Fact Check: This video of woman set on fire on the roadside is not from Uttar Pradesh, viral claim is fake 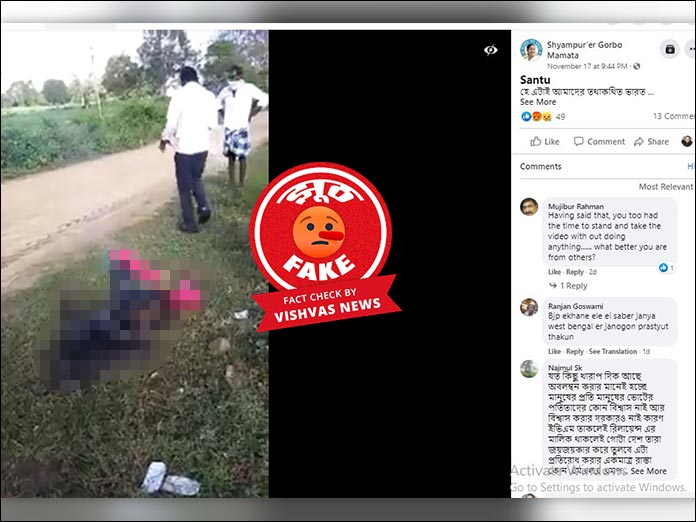 New Delhi (Vishvas News). A video of half-burnt body of a woman is viral on social media with a claim that it is from Uttar Pradesh.

Vishvas News investigation revealed the claim is fake. The viral video is from Karnataka.

Social media user Shyampur’er Gorbo Mamata uploaded a video showing a burning body of a dead woman writing, “This is our so-called India. Is this the freedom of women? Similarly, daughters are being killed in Uttar Pradesh!” The archived version of the post can be seen here .

We first uploaded the viral video to the InVID tool and extracted keyframes. We searched them on the Internet using Google reverse image search tool. We found the screenshots of the viral video in a news article published in Kannada language on saakshatv.com with a report stating that a young woman was set on fire in Periyapatna in Mysore district of Karnataka on 8 November.

We also found this news published on 9 November on the Times of India website. “A woman’s body was set on the roadside in Kellur village under the Periyapatna police limits in the early hours of Sunday. The body was completely burnt between the knee and head. Police suspect that the victim was murdered elsewhere and was brought to the spot and burnt. It is not known where, why and who murdered him,” stated the article.

We also received an update about the news on The Hindu. The report stated, “The mystery of the discovery of the dead body of a woman on the roadside near Kellur village in Periyapatna, …has been solved by the police of Mysore district. The police have arrested the woman’s lover and her accomplice.”

Vishvas News contacted CB Rishyanth, Superintendent of Police, Mysore district to verify the claim. “The incident is from Karnataka, where the dead body was found in Kellur village in Periyapatna. Two people have been detained in this case,” he said.

Conclusion: This viral post is fake. The viral video is from Karnataka and not Uttar Pradesh.