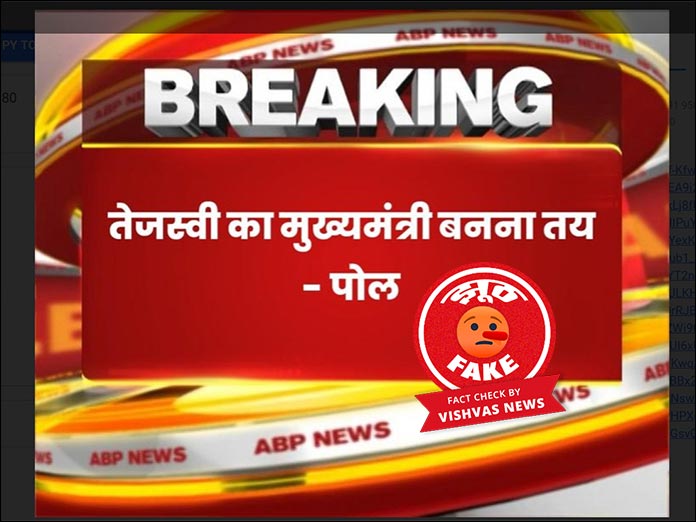 New Delhi (Vishvas News). A picture allegedly from the ABP News is viral on social media with a claim that RJD leader Tejashwi Yadav is set to become the chief minister of Bihar.

Vishvas News received this claim for fact check on its Fact Checking WhatsApp chatbot (+91 95992 99372). Vishvas News investigation revealed the claim is fake. ABP News has not broadcasted any such news.

The same graphic plate is shared on other social media platforms. The archived version of the post can be seen here .

We searched on the Internet for news about any such report in ABP News website and YouTube channel. However, we did not find this viral graphic plate or the content anywhere.

The ABP News News conducted an opinion poll between October 1 and October 23. But the report based on this opinion poll also did not have any such information as in the viral claim.

Vishvas News contacted the editorial department of ABP News to verify the claim viral on social media since 6 November. A person working in the editorial team said that this viral graphic plate is fake and this type of survey was not done during the election.

Conclusion: The alleged ABP graphic plate is fake. ABP News has not published any such news.