The viral post is fake. An old of an incident from Ghaziabad is viral with fake claims. 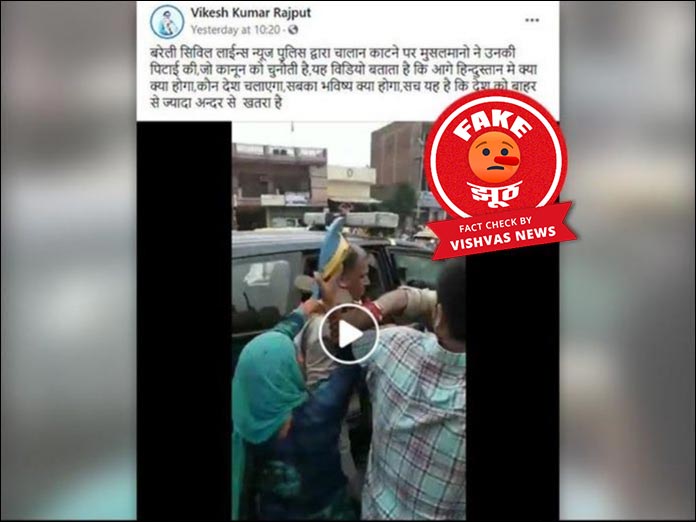 New Delhi (Vishvas News). A video of a woman attacking policeman with slippers is viral on social media with a claim that Muslims beat up police in Bareilly if issued with challan.

Vishvas News investigation revealed the claim is fake.  The video is of a 2018 incident in Ghaziabad.

Facebook user Vikesh Kumar Rajput shared a post claiming Muslims beat up Police in Bareilly if issued with challan. The archived version of the post can be seen here.

We first uploaded the viral video to the InVID tool and extracted keyframes. We searched them on the Internet using Google reverse image search tool. We found this video in some media reports published on 28 August 2018, stating the the incident took place in Loni border, Ghaziabad at a State Bank of India branch. A police constable was beaten up by the relatives of a customer who came to make corrections in Aadhaar card. We did not find any authentic news reports stating that Police were beaten up for issuing challan.

Ghaziabad police posted a tweet on 27 August 2018 in which SSP Vaibhav Krishna clarified the incident is from Loni border and two accused have been arrested.

We found a tweet posted by the Bareilly police on 21 January 2021, clarifying the happened in Ghaziabad district in 2018.

We also contacted Bareilly SP Rahit Singh Sajvan. He told that the incident in the viral video is not from Bareilly. He clarified that it is an old incident from Ghaziabad.

Social scanning of the user who shared the viral post revealed that he is from Moradabad, Uttar Pradesh.

Conclusion: The viral post is fake. An old of an incident from Ghaziabad is viral with fake claims.